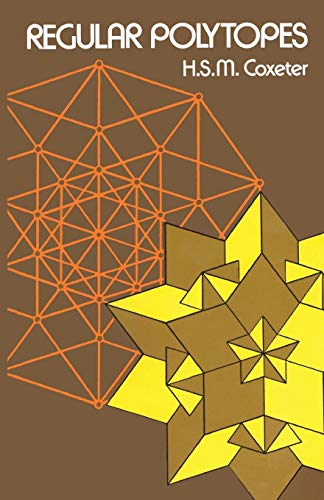 Foremost book available on polytopes, incorporating ancient Greek and most modern work done on them. Beginning with polygons and polyhedrons, the book moves on to multi-dimensional polytopes in a way that anyone with a basic knowledge of geometry and trigonometry can easily understand. Definitions of symbols. Eight tables plus many diagrams and examples. 1963 edition.

H. S. M. Coxeter: Through the Looking Glass
Harold Scott MacDonald Coxeter (1907–2003) is one of the greatest geometers of the last century, or of any century, for that matter. Coxeter was associated with the University of Toronto for sixty years, the author of twelve books regarded as classics in their field, a student of Hermann Weyl in the 1930s, and a colleague of the intriguing Dutch artist and printmaker Maurits Escher in the 1950s.
In the Author's Own Words:
"I'm a Platonist — a follower of Plato — who believes that one didn't invent these sorts of things, that one discovers them. In a sense, all these mathematical facts are right there waiting to be discovered."
"In our times, geometers are still exploring those new Wonderlands, partly for the sake of their applications to cosmology and other branches of science, but much more for the sheer joy of passing through the looking glass into a land where the familiar lines, planes, triangles, circles, and spheres are seen to behave in strange but precisely determined ways."
"Geometry is perhaps the most elementary of the sciences that enable man, by purely intellectual processes, to make predictions (based on observation) about the physical world. The power of geometry, in the sense of accuracy and utility of these deductions, is impressive, and has been a powerful motivation for the study of logic in geometry."
"Let us revisit Euclid. Let us discover for ourselves a few of the newer results. Perhaps we may be able to recapture some of the wonder and awe that our first contact with geometry aroused." — H. S. M. Coxeter

Descripción Dover Publications Inc., United States, 1973. Paperback. Condición: New. New edition. Language: English. Brand new Book. Polytopes are geometrical figures bounded by portions of lines, planes, or hyperplanes. In plane (two dimensional) geometry, they are known as polygons and comprise such figures as triangles, squares, pentagons, etc. In solid (three dimensional) geometry they are known as polyhedra and include such figures as tetrahedra (a type of pyramid), cubes, icosahedra, and many more; the possibilities, in fact, are infinite! H. S. M. Coxeter's book is the foremost book available on regular polyhedra, incorporating not only the ancient Greek work on the subject, but also the vast amount of information that has been accumulated on them since, especially in the last hundred years. The author, professor of Mathematics, University of Toronto, has contributed much valuable work himself on polytopes and is a well-known authority on them. Professor Coxeter begins with the fundamental concepts of plane and solid geometry and then moves on to multi-dimensionality. Among the many subjects covered are Euler's formula, rotation groups, star-polyhedra, truncation, forms, vectors, coordinates, kaleidoscopes, Petrie polygons, sections and projections, and star-polytopes. Each chapter ends with a historical summary showing when and how the information contained therein was discovered. Numerous figures and examples and the author's lucid explanations also help to make the text readily comprehensible. Although the study of polytopes does have some practical applications to mineralogy, architecture, linear programming, and other areas, most people enjoy contemplating these figures simply because their symmetrical shapes have an aesthetic appeal. But whatever the reasons, anyone with an elementary knowledge of geometry and trigonometry will find this one of the best source books available on this fascinating study. Nş de ref. del artículo: AAC9780486614809

Descripción Paperback. Condición: New. 3rd. Paperback. Foremost book available on polytopes, incorporating ancient Greek and most modern work done on them. Beginning with polygons and polyhedrons, the book moves on to multi-dimensional polytop.Shipping may be from multiple locations in the US or from the UK, depending on stock availability. 368 pages. 0.470. Nş de ref. del artículo: 9780486614809