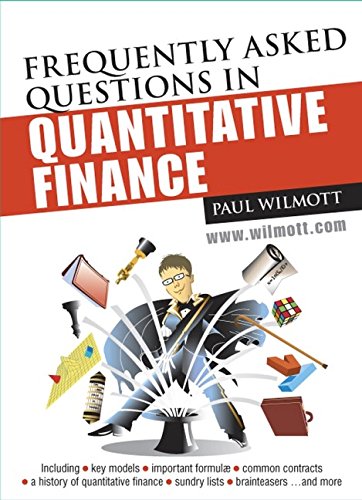 Paul Wilmott writes, 'Quantitative finance is the most fascinating and rewarding real-world application of mathematics. It is fascinating because of the speed at which the subject develops, the new products and the new models which we have to understand. And it is rewarding because anyone can make a fundamental breakthrough. Having worked in this field for many years, I have come to appreciate the importance of getting the right balance between mathematics and intuition. Too little maths and you won't be able to make much progress, too much maths and you'll be held back by technicalities. I imagine, but expect I will never know for certain, that getting the right level of maths is like having the right equipment to climb Mount Everest; too little and you won't make the first base camp, too much and you'll collapse in a heap before the top. 'Whenever I write about or teach this subject I also aim to get the right mix of theory and practice. Finance is not a hard science like physics, so you have to accept the limitations of the models. But nor is it a very soft science, so without those models you would be at a disadvantage compared with those better equipped. I believe this adds to the fascination of the subject'. This FAQs book looks at some of the most important aspects of financial engineering, and considers them from both theoretical and practical points of view. I hope that you will see that finance is just as much fun in practice as in theory, and if you are reading this book to help you with your job interviews, good luck! Let me know how you get on!'

Paul Wilmott is a researcher, consultant and lecturer in quantitative finance in London, UK. He is founder of Wilmott Associates, a financial consultancy and training firm, from which he publishes Wilmott magazine. The Financial Times called him a cult derivatives lecturer. He is one of the world's leading experts on quantitative finance and derivatives and is renowned for his criticism of popular models and concepts and for his unique, informal writing style.