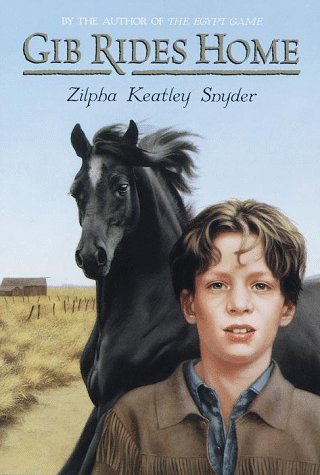 A three-time Newbery Honor-winner offers a vivid look at the life of Gib Whittaker, an orphan on the turn-of-the-century Nebraska prairie, a horse-loving boy who searches for a family to adopt him without reducing him to indentured servitude. Reprint.

Raised in California, in the country--with no television and few movies to watch--three-time Newbery Honor winner Zilpha Keatley Snyder filled her childhood with animals, games, and books. Among her earliest acquaintances were cows, goats, ducks, chickens, rabbits, dogs, cats, and horses. In fact, her family's animals were her closest friends, and a nearby library was a constant source of magic, adventure, and excitement for her. And when she wasn't reading or playing with animals, Snyder made up games and stories to entertain herself.
While Zilpha Keatley Snyder was growing up, interesting stories filled her household. Both of her parents spent a lot of time relating accounts of past events in their lives, so Snyder came by her storytelling instincts early. But unlike her parents, when Zilpha had something to tell, she had, as she says, "an irresistible urge to make it worth telling. And without the rich and rather lengthy past that my parents had to draw on, I was forced to rely on the one commodity of which I had an adequate supply--imagination." Consequently, at the age of eight, Zilpha Keatley Snyder decided to become a writer.
As a student, Snyder was very proficient in reading and writing, and experienced few problems in the small country schools she attended until the end of sixth grade. But upon entering the seventh grade in the city of Ventura, she was, as she recalls, "suddenly a terrible misfit." Snyder retreated further into books and daydreams, and admits: "Book were the window from which I looked out of a rather meager and decidedly narrow room, onto a rich and wonderful universe. I loved the look and feel of them, even the smell. . . . Libraries were treasure houses. I always entered them with a slight thrill of disbelief that all their endless riches were mine for the borrowing."
Snyder attended Whittier College in Southern California, where she says she "grew physically and socially as well as intellectually." There she also met her future husband, Larry Snyder. While ultimately planning to be a writer, after graduation Snyder decided to teach school temporarily. But she found teaching to be an extremely rewarding experience and taught in the upper elementary grades for a total of nine years, three of them as a master teacher for the University of California at Berkeley. Zilpha and Larry were married in June of 1950, and went on to have three children, Melissa, Douglas, and Ben.
In the early sixties, when all of her children were finally in school, Snyder began to think about writing again. "Writing for children hadn't occurred to me when I was younger, but nine years of teaching in the upper elementary grades had given me a deep appreciation of the gifts and graces that are specific to individuals with ten or eleven years of experience as human begins. Remembering a dream I'd had when I was twelve years old, about some strange and wonderful horses, I sat down and began to write."
Season of Ponies, Zilpha Keatley Snyder's first book, was published in 1964. Her most recent novel, Gib Rides Home, follows an orphan boy who shows strength and courage as he endures harsh treatment during his five years at the orphanage before he finds a family of his own. Gib's story is a tribute to the memory of Snyder's father who grew up in an orphanage in Oklahoma.
Zilpha Keatley Snyder's three Newbery Honor books are: The Egypt Game, The Headless Cupid, and The Witches of Worm. Other books for Bantam Doubleday Dell are The Trespassers, an American Bookseller Pick of the List; Cat Running, a School Library Journal Best Book of the Year and winner of the 1995 John and Patricia Beatty Award; and her newest work, The Gypsy Game, companion to The Egypt Game.
Zilpha Keatley Snyder currently lives in Mill Valley, a small town near San Francisco. In her spare time, she loves reading and traveling, and of course, writing, which besides being her occupation has always been her favorite hobby.