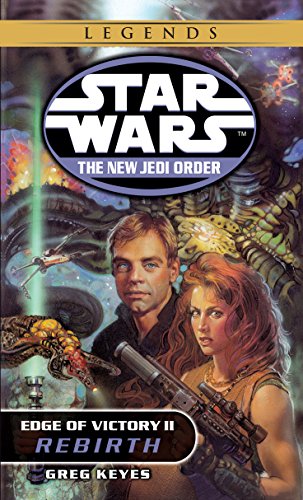 As the violent Yuuzhan Vong search the universe for Jedi to destroy, Han Solo and Leia Organa Solo risk everything to reinforce the Jedi resistance, while Anakin and Tahiri, wanted for murder, jump into hyperspace and find themselves immersed in an even more dangerous situation. Original.

"The Star Wars "epic continues its dazzling space odyssey in The New Jedi Order-as Luke and Mara, Leia and Han, and others battle the mighty enemy from beyond the galactic rim.
The brutal Yuuzhan Vong are scouring the universe for Jedi to slaughter. With no help from the divided New Republic, the Jedi stand alone against their seemingly invincible foe. Han and Leia Organa Solo risk deadly consequences with their controversial tactics to bolster the Jedi resistance. After uncovering a new Yuuzhan Vong menace, Anakin and Tahiri find themselves wanted for murder by the Peace Brigade. To avoid capture, they jump into hyperspace . . . and into trouble far graver.
Hunted by the Yuuzhan Vong, wanted as criminals by the New Republic, and with unrest stirring within their own ranks, the Jedi find peril everywhere they turn. But even in the midst of despair, while the most fiercest battle of all looms on the horizon, hope arises with the birth of one very special child. . . .