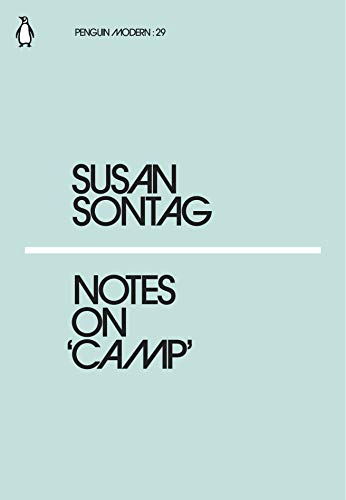 'The ultimate Camp statement: it's good because it's awful.'

These two classic essays were the first works of criticism to break down the boundaries between 'high' and 'low' culture, and made Susan Sontag a literary sensation.

Penguin Modern: fifty new books celebrating the pioneering spirit of the iconic Penguin Modern Classics series, with each one offering a concentrated hit of its contemporary, international flavour. Here are authors ranging from Kathy Acker to James Baldwin, Truman Capote to Stanislaw Lem and George Orwell to Shirley Jackson; essays radical and inspiring; poems moving and disturbing; stories surreal and fabulous; taking us from the deep South to modern Japan, New York's underground scene to the farthest reaches of outer space.

Susan Sontag was born in Manhattan in 1933 and studied at the universities of Chicago, Harvard and Oxford. Her non-fiction works include Against Interpretation, On Photography, Illness as Metaphor, AIDS and its Metaphors and Regarding the Pain of Others. She is also the author of four novels, a collection of stories and several plays. Her books are translated into thirty-two languages. In 2001 she was awarded the Jerusalem Prize for the body of her work, and in 2003 she received the Prince of Asturias Prize for Literature and the Peace Prize of the German Book Trade. She died in December 2004.

Descripción 2018. Paperback. Condición: New. Paperback. 'The ultimate Camp statement- it's good because it's awful.'These two classic essays were the first works of criticism to break down the boundaries between 'high' and 'low' culture, and ma.Shipping may be from multiple locations in the US or from the UK, depending on stock availability. 64 pages. 0.050. Nş de ref. del artículo: 9780241339701