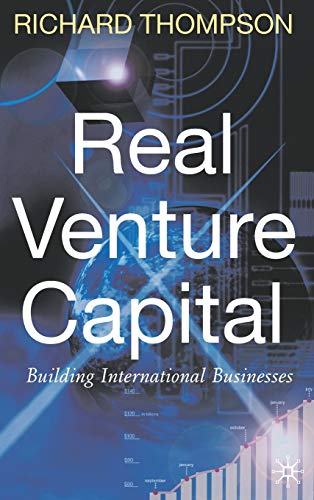 Real Venture Capital argues the case for building international businesses through the combined provision of genuine help, expertise and finance, rather than just finance

' Richard's book is the best and most wide ranging study of venture capital that I have read. His analysis of the key factors involved in successful venture capital is masterly. His description of the essential relationships between the venture capitalists, entrepreneurs, Boards of directors, academics, investors and others, is a model of perception and clarity. Richard's extensive experience of US venture capital has enabled him to explain the importance of, and the way to achieve, international growth especially for British and European science- and technology-based companies. He makes an unanswerable case for a major increase of resources to support venture capital, particularly companies established to exploit the results of the outstanding science and technology research in the UK.

Real Venture Capital is a unique and highly readable guidebook for all those involved in venture capital, or aspiring to be so, and it should have a place on the desks, not only of venture capitalists, but also of institutional investors, academics, ministers and civil servants, financial journalists, angel investors and large technology company executives.

As the international markets for new science and technology-based businesses expand in future not least in major markets in the Far East, Real Venture Capital provides a practical and comprehensive source of good advice both on what to do and what to avoid.' - Roger Brooke O.B.E. Founder, Chief Executive and then Chairman of Candover Investments plc. 1980-99

'Richard Thompson has been at the coal face of British venture capital for over thirty years. Combining his analytical training as an engineer and a management consultant with a deep knowledge of the technology and health care industries, he has achieved a formidable long-term record. Helping grow businesses in these areas is both more difficult and more exciting than mere financial engineering, however fashionable, which has catapulted private equity so stridently into the public arena. Anyone with an interest in building a business and creating employment and Economic Value Added should read this book.' - James Joll, Chairman of the Pearson Group Pension Fund and formerly the Group's Finance Director 1985 96

'My regret is that Richard had not written Real Venture Capital when I started investing in venture capital. It is full of common sense and provides the fundamentals for successful venture capital investment. Spiced up with some sharp and pertinent one liners, it is an excellent and concise read' - Stewart Newton, Founder and Chairman of Newton Investment Management Ltd 1977-2000

'I am very happy to endorse Richard Thompson's excellent book on venture capitalism. I have known him over many years and admired what he has done to support early state companies, in particular providing a bridge to Anglo/US technology.

I have been a passionate believer in helping start and encourage early stage companies and I believe that this book will help a large number of would-be entrepreneurs to avoid some mistakes and to build on the many constructive suggestions in the book.' - Michael Stoddart, Managing Director and then Chairman of Electra Investment Trust plc 1974-99

A principal theme of the book is a plea for "real venture capital," with the venture capitalist adding substantial value to companies and their founders through a wide knowledge of business, in contrast to the purely financial skills required in other sectors of the private equity field, such as leveraged buy-outs.

Descripción Palgrave MacMillan, United Kingdom, 2008. Hardback. Condición: New. 2008 ed. Language: English. Brand new Book. A principal theme of the book is a plea for ' real venture capital', with the venture capitalist adding substantial value to companies and their founders through a wide knowledge of business, in contrast to the purely financial skills required in other sectors of the private equity field, such as leveraged buy-outs. Nş de ref. del artículo: LHB9780230202221