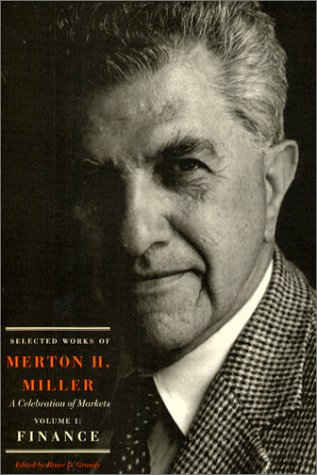 "Merton Miller is widely considered to be the founder of modern finance. He helped revolutionize corporate financial practice, changing it from a loose collection of rules to a sophisticated approach to maximizing shareholder value." - Robert Hamada, University of Chicago Graduate School of Business; "Merton was a remarkable and brilliant man who changed the landscape of 20th century finance." - Scott Gordon, chairman of the Chicago Mercantile Exchange, quoted in the Chicago Sun-Times

Widely regarded as one of the founders of modern corporate finance, Merton H. Miller was awarded a Nobel Prize in 1990 for his work in the theory of finance and financial economics. Selected Works of Merton H. Miller gathers together in two volumes a selection of Miller's most influential contributions over more than fifty years of active research. A common theme running throughout both volumes is Miller's conviction about the utility of market-based approaches to topics as diverse as dividend policy, bank regulation, the structure of securities markets, and competition between research universities and teaching colleges. Miller was perhaps best known for a series of highly influential papers he cowrote in the 1950s and 1960s with fellow Nobel laureate Frnaco Modigliani that advanced a set of capital structure theorems later dubbed the "M and M propositions." Four of these papers are reprinted here, together with important later work by Miller in macroeconomics, corporate capital structure, management science, asset pricing, and the economic and regulatory problems of the financial services industry. Diverse and innovative, the papers in Selected Works of Merton H. Miller will interest students and practitioners of economics, finance, and business, as well as policymakers responsible for market regulation.

Descripci¾n University of Chicago Press, 2002. Condici¾n: Good. 1st Edition. Former Library book. Shows some signs of wear, and may have some markings on the inside. N║ de ref. del artĒculo: 16072721-6

Descripci¾n University Of Chicago Press, 2002. Condici¾n: Good. A+ Customer service! Satisfaction Guaranteed! Book is in Used-Good condition. Pages and cover are clean and intact. Used items may not include supplementary materials such as CDs or access codes. May show signs of minor shelf wear and contain limited notes and highlighting. N║ de ref. del artĒculo: 0226527476-2-4