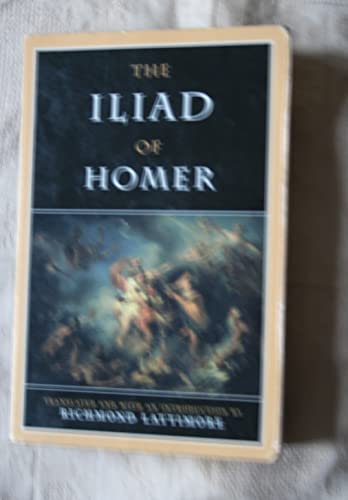 Undated reorint, light wear to cover. Shipped from the U.K. All orders received before 3pm sent that weekday.

"The finest translation of Homer ever made into the English language."—William Arrowsmith

"This magnificent translation of Homer's epic poem . . . will appeal to admirers of Homer and the classics, and the multitude who always wanted to read the great Iliad but never got around to doing so."—The American Book Collector

"Perhaps closer to Homer in every way than any other version made in English."—Peter Green, The New Republic

"The feat is decisive that it is reasonable to foresee a century or so in which nobody will try again to put the Iliad in English verse."—Robert Fitzgerald

"Each new generation is bound to produce new translations. [Lattimore] has done better with nobility, as well as with accuracy, than any other modern verse translator. In our age we do not often find a fine scholar who is also a genuine poet and who takes the greatest pains over the work of translation."—Hugh Lloyd-Jones, New York Review of Books

"Over the long haul Lattimore's translation is more powerful because its effects are more subtle."—Booklist

"Richmond Lattimore is a fine translator of poetry because he has a poetic voice of his own, authentic and unmistakable and yet capable of remarkable range of modulation. His translations make the English reader aware of the poetry."—Moses Hadas, The New York Times

2. The Iliad of Homer