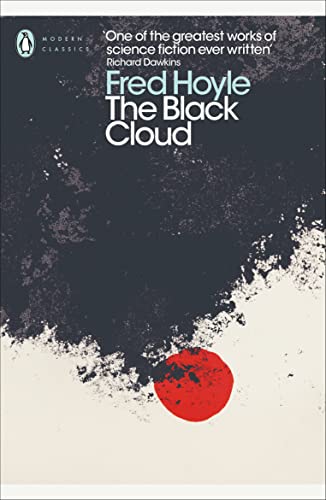 A 1959 classic 'hard' science-fiction novel by renowned Cambridge astronomer and cosmologist Fred Hoyle. Tracks the progress of a giant black cloud that comes towards Earth and sits in front of the sun, causing widespread panic and death. A select group of scientists and astronomers - including the dignified Astronomer Royal, the pipe smoking Dr Marlowe and the maverick, eccentric Professor Kingsly - engage in a mad race to understand and communicate with the cloud, battling against trigger happy politicians., In the pacy, engaging style of John Wyndham and John Christopher, with plenty of hard science thrown in to add to the chillingly credible premise (he manages to foretell Artificial Intelligence, Optical Character Recognition and Text-to-Speech converters), Hoyle carries you breathlessly through to its thrilling end.

Hoyle's enduring insights into stars, nucleosynthesis, and the large-scale universe rank among the greatest achievements of 20th-century astrophysics ... His theories were unfailingly stimulating, even when they proved transient. He will be remembered with fond gratitude not only by colleagues and students, but by a much wider community who knew him through his talks and writings. (Sir Martin Rees Obit in Physics Today)

Sir Fred Hoyle, F.R.S. (1915-2001), renowned astronomer, cosmologist, writer, broadcaster, and television personality, was born in Bingley, Yorkshire and educated at Bingley Grammar School and Emmanuel College, Cambridge. A Fellow of St John's College, Cambridge, he was a university lecturer in Mathematics before becoming Plumian Professor of Astronomy and Experimental Philosophy (1958-73) and Director of the Cambridge Institute of Theoretical Astronomy, which he founded (1967-73). In 1969 he was elected an associate member of the American National Academy of Science - the highest U.S. honour for non-American scientists. In 1974 he was awarded a Royal Medal by Her Majesty the Queen in recognition of his distinguished contributions to theoretical physics and cosmology and in 1997 shared the Crafoord Prize for his contribution to the understanding of the nuclear process in stars. Other notable fiction include Ossian's Ride, October the First is Too Late and Comet Halley.