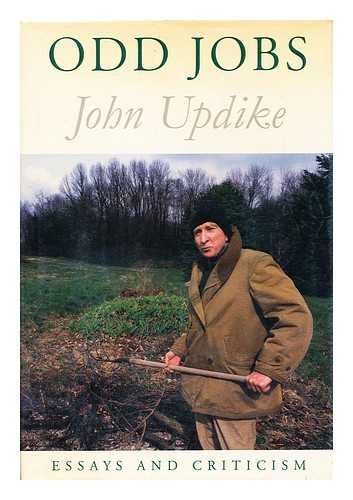 This collection of non-fictional prose, following "Assorted Prose", "Picked-up Pieces" and "Hugging the Shore", looks at subjects as diverse as national monuments, the female body, the Gospel of Mathew and popular music. The book concludes with the authors thoughts on his own work.

John Updike was born in 1932 in Shillington, Pennsylvania. He is the author of over fifty books, including The Poorhouse Fair; the Rabbit series (Rabbit, Run; Rabbit Redux; Rabbit Is Rich; Rabbit At Rest); Marry Me; The Witches of Eastwick, which was made into a major feature film; Memories of the Ford Administration; Brazil; In the Beauty of the Lilies; Toward the End of Time; Gertrude and Claudius; and Seek My Face. He has written a number of collections of short stories, including The Afterlife and Other Stories and Licks of Love, which includes a final Rabbit story, Rabbit Remembered. His essays and criticism first appeared in publications such as the New Yorker and the New York Review of Books, and are now collected into numerous volumes. Collected Poems 1953-1993 brings together almost all of his verse, and a new edition of his Selected Poems is forthcoming from Hamish Hamilton.

Updike graduated from Harvard College in 1954, and spent a year at Oxford's Ruskin School of Drawing and Fine Art. From 1955 to 1957 he was a member of staff at the New Yorker, and he lived in Massachusetts from 1957 until his death in January 2009.

Descripción Paperback. Condición: Very Good. The book has been read, but is in excellent condition. Pages are intact and not marred by notes or highlighting. The spine remains undamaged. Nş de ref. del artículo: GOR001368214

Descripción Paperback. Condición: Good. The book has been read but remains in clean condition. All pages are intact and the cover is intact. Some minor wear to the spine. Nş de ref. del artículo: GOR004664068

Descripción Penguin, 1992. Paperback. Condición: Good. Minor shelf wear Good condition is defined as: a copy that has been read but remains in clean condition. All of the pages are intact and the cover is intact and the spine may show signs of wear. The book may have minor markings which are not specifically mentioned. Most items will be dispatched the same or the next working day. Nş de ref. del artículo: wbb0014891745

Descripción -. Paperback. Condición: Very Good. Odd Jobs This book is in very good condition and will be shipped within 24 hours of ordering. The cover may have some limited signs of wear but the pages are clean, intact and the spine remains undamaged. This book has clearly been well maintained and looked after thus far. Money back guarantee if you are not satisfied. See all our books here, order more than 1 book and get discounted shipping. Nş de ref. del artículo: 7719-9780140167801

Descripción London : Penguin In Association With Andre Deutsch., 1992. Condición: Good. A+ Customer service! Satisfaction Guaranteed! Book is in Used-Good condition. Pages and cover are clean and intact. Used items may not include supplementary materials such as CDs or access codes. May show signs of minor shelf wear and contain limited notes and highlighting. Nş de ref. del artículo: 0140167803-2-4

Descripción Penguin, 1992. Paperback. Condición: Very Good. WE ARE PROCESSING ORDERS AS NORMAL DURING THIS VIRUS EPIDEMIC, ALL ITEMS ARE SENT BY ROYAL MAIL. DISPATCHED FROM THE UK WITHIN 24 HOURS ( BOOKS ORDERED OVER THE WEEKEND DISPATCHED ON MONDAY) BY ROYAL MAIL. ALL OVERSEAS ORDERS SENT BY AIR MAIL. WE ALSO ACCEPT PAYMENT IN US DOLLARS OR EURO BY BANK TRANSFER. Nş de ref. del artículo: mon0000726121