Artículos relacionados a A People Betrayed: A History of Corruption, Political...

A People Betrayed: A History of Corruption, Political Incompetence and Social Division in Modern Spain 1874-2018 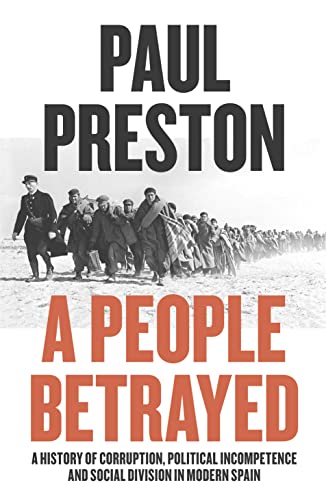 Praise for The Last Days of the Spanish Republic

‘Preston's mission in life is to bring clarity to the confusing tragedy of the Spanish Civil War. This is his twelfth book on the war and its legacy ... [it] is written with the same sober lucidity that distinguishes the previous eleven’ The Times

‘Compelling and convincingly argued ... the story of the final, tragic days of the Spanish Republic has never been told so clearly before. With a keen eye for historical detail and a painful sense of the human lives at stake, Preston paints a vivid portrait of those involved’ Spectator

‘Masterly and intensely moving ... in Preston, author of several award-winning books on the conflict, the reader could not hope for a more sure-footed guide ... Britons today know far less than they should about the Spanish Civil War ... our knowledge would be poorer still but for Preston's indefatigable scholarship, elegant prose and impeccable judgement’ Sunday Telegraph

Drawing on more than forty years of research, A PEOPLE BETRAYED reveals the extent of the devastating betrayal of Spain by its political class, its military and its Church.

In 1898 Spain was in utter despair. With the catastrophic defeat at the hands of the United States and a succession of collapsing dictatorships and democracies to contend with, this mounting anguish culminated in the devastating Civil War. So terrible were the Civil War and the nearly four decades of dictatorship that followed it that it seemed as if the pattern had been broken. Indeed, the transition to democracy in the 1970s came to be considered as a model for other countries in Eastern Europe and Latin America.

But the spectacular boom of the first years of membership of the European Economic Community masked the fact that the underlying issues had not been fully resolved. The present crisis facing Spain is the result of an incomplete transition.

A PEOPLE BETRAYED covers the lives of the individuals, heroes and villains who made a huge difference – the dictators Primo de Rivera and Franco, the mass murders of the Civil War, and important statesman such as Manuel Azaña, Juan Negrín and Ramon Serrano Suñer, and rise and subsequent discrediting of the monarchy of King Juan Carlos and the extremists of right and left.

Paul Preston, a specialist in Spanish History at the LSE, argues that there is a curious pattern in Spain’s modern history, arising from a reoccurring disconnect between the social reality and the political powers ruling over it.

1. A People Betrayed: A History of Corruption, Political Incompetence and Social Division in Modern Spain 1874-2018 (Hardback)

Descripción HarperCollins Publishers, United Kingdom, 2020. Hardback. Condición: New. Language: English. Brand new Book. From the foremost historian of modern Spain comes the bloody, much misunderstood story of how, from 1874 to the present day the Spanish people were devastatingly betrayed by their political class, military and Church. This comprehensive history of modern Spain chronicles the fomenting of violent social division throughout the country by institutionalised corruption and startling political incompetence. Most spectacularly during the Primo de Rivera and Franco dictatorships, grotesque and shameless corruption went hand-in-hand with inept policies that prolonged Spain's economic backwardness well into the 1950s. A People Betrayed looks back to the years prior to 1923 when electoral corruption excluded the masses from organized politics and gave them a choice between apathetic acceptance and violent revolution. Bitter social conflict, economic tensions and conflict between centralist nationalism and regional independence movements then exploded into the civil war of 1936-1939. It took the horrors of that war and the dictatorship that followed to break the pattern. The moderation shared by the progressive right and a chastened left underlay a bloodless transition to democracy after 1975. Yet, as before, corruption and political incompetence continued to have a corrosive effect on political coexistence and social cohesion. Sparkling with vivid portraits of politicians and army officers, some corrupt and others clean, recounting the triumphs and disasters of Kings Alfonso XIII and Juan Carlos, A People Betrayed unravels the mystery of why both right and left have been unable or unwilling to deal with corruption and the pernicious clash between Spanish centralist nationalism and regional desires for independence. Nş de ref. del artículo: AA89780007558377

Descripción Liveright, 2020. Hardcover. Condición: New. Hardcover. From the foremost historian of modern Spain comes the bloody, much misunderstood story of how, from 1874 to the present day the Spanish people were devastatingly betrayed by their politica.Shipping may be from multiple locations in the US or from the UK, depending on stock availability. 768 pages. 1.112. Nş de ref. del artículo: 9780007558377

5. A People Betrayed: A History of Corruption, Political Incompetence and Social Division in Modern Spain 1874-2018

9. A People Betrayed: A History of Corruption, Political Incompetence and Social Division in Modern Spain 1874-2018

10. A People Betrayed: A History of Corruption, Political Incompetence and Social Division in Modern Spain 1874-2018