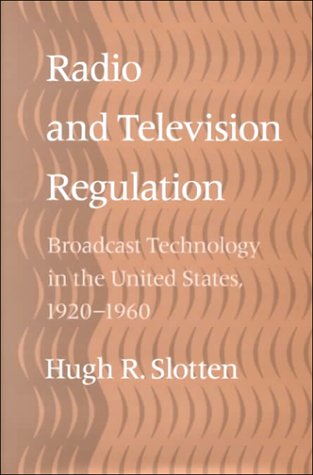 Radio and Television Regulation : Broadcast Technology in the United States, 1920-1960

"[Radio and Television Regulation] is a solidly grounded scholarship of the highest quality."

"Slotten's study is a valuable addition to the historical literature on broadcasting (or more broadly the regulation of technology in society). It is both well researched and well written."

"Another soild contribution to the literature on the development of U.S. broadcasting. Slotten's research into the complex process of broadcast regulation is meticulous."

"The depiction of the manifold tensions that exist between technocratic and nontechnocratic views concerning the function of public policy institutions infuse the book's narrative with a freshness and originality that make it a welcome and valuable addition to what has been an otherwise lackluster list of titles typically more intent on describing the rules and regulations that govern broadcast media than in examining their revealing and illuminating origins."

"Analyzing the complex interplay of of the factors forming public policy for radio and television broadcasting, and taking into account the ideological traditions that framed these controversies, the author sheds light on the rise of the regulatory state."

"Not since the writings of Marshall McLuhan have knowledge shapers in the broadcast field shown interest in technological determinism... Finally Hugh R. Slotten redeems a technological perspective."

"A rigorous and thoughtful study of American broadcast regulation is always a valuable contribution. Hugh Slotten's new book succeeds admirably in this regard."

"Slotten effectively uses published primary sources and unpublished archives to discuss the complex interactions between engineers and policy-makers in the United States. The scope of the book is excellent and covers decisions over a forty-year period involving four major technologies (AM radio, monochrome television, FM radio, and color television) that defined the broadcast industry until the passage of the Telecommunications Act in 1996."

1. Radio and Television Regulation: Broadcast Technology in the United States, 1920-1960