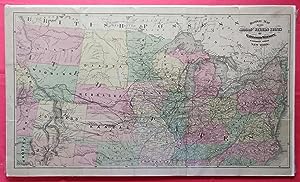 Railway Map of the Middle and Western States

Unframed, original, hand-colored pocket map showing U.S. States and Territories designated by name and color, bounded by British Possessions and Upper Canada, Vermont, South Carolina, Arizona and Montana drawn on a single sheet measuring 21-1/4" x 12-1/2", unfolded. ** This is a unique piece of history from the Civil War and Reconstruction era. A map that shows exploratory routes surveyed by Fremont in 1843 and 1844, Gen Kearney in 1846, Capt Stansbury in 1850, Governor Stevens as well as Lieut's Donelson, Grover, and Mallan in 1853, and Lieut Warren in 1856, among others, prior to the outbreak of the Civil War; shows both the Southern and Central railroad routes so fiercely debated btw respective Senators for years prior to secession; and, shows the progress designated railroad companies were making on the Central route in accordance w/ the Pacific Railway Act of 1862, passed just months after southern Senators ceded their seats in the Senate. ** The map incl's a double-line border and fancy title above a penned note "late 1860's" and shows, cities, towns, Indian tribal lands, topography designated by hachures, emigrant trails, routes and railroads (along w/ sta's) incl'g detail of the progress the Union Pacific (map call-out Central Pacific RR) and the various other railroad companies regulated by the Act, were making to comply w/ their statutory requirements. In addition to railway routes, the map shows emigrant trails incl'g the Santa Fe, Oregon, Overland, Mormon and California. ** A Watson map publ in 1867 shows similar State and Territorial boundary configurations but, has a different style Title, shows the SE corner of Wyoming as Sioux lands (pre Ft Laramie Treaty of 1868), and does not show either the proposed Central or Southern Routes. A later Watson map publ in 1869 shows a broader extent of the U.S. and the Central RR developed well-beyond that shown on this map. No other examples of a map remotely similar could be found on-line. The date penned-in below the Map Title may be accurate in that the rail-lines are far less developed than that shown in Watson's 1869 publication, it uses the archaic sp of Sheyenne iin lieu of the more common Cheyenne, Ft Halleck (1862-66) is shown but Laramie City (now the City of Laramie) is not, a major rail head the tracks reached in 1868. The map is in excellent condition w/ strong imprint, bright colors, light soiling/fading, minimal tears/chipping and crumpling/creasing to margins and multiple fold lines in both directions common to pocket style maps. VERSO - blank. N° de ref. de la librería 000631