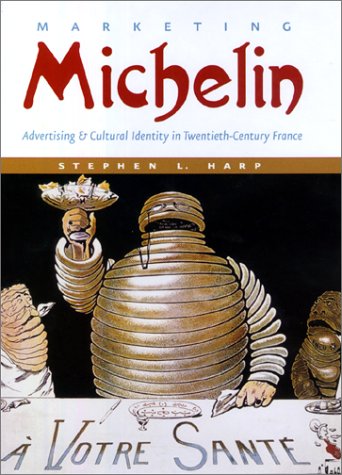 Language: English. Brand new Book. One of the world's largest tire makers and an international corporation with interests in countries around the world, Michelin is also a uniquely French company, one that throughout its history has closely identified itself with the country's people and culture. In the process, it has helped shape the self-image of twentieth-century France. In Marketing Michelin, Stephen Harp provides a provocative history of the company and its innovative advertising campaigns between 1898, when Bibendum-the company's iconic "Michelin Man"-was first introduced, to 1940, when France fell to the Nazis and the company's top executive, Edouard Michelin, died. Both events indelibly changed the company and the national context in which it operated. Harp uses the familiar figure of Bibendum and the promotional campaigns designed around him to analyze the cultural assumptions of belle-epoque France, including representations of gender, race, and class.He also considers Michelin's efforts to promote automobile tourism in France and Europe through its famous Red Guide (first introduced in 1900), noting that, in the aftermath of World War I, the company sold tour guides to the battlefields of the Western Front and favorably positioned France's participation in the war as purely defensive and unavoidable. Throughout this period, the company successfully identified the name of Michelin with many aspects of French society, from cuisine and local culture to nationalism and colonialism. Michelin also introduced Fordism and Taylorism to France, and Harp offers a nuanced understanding of how the firm effected Americanization and modernization despite the protests of the French public. Through its marketing efforts, Harp concludes, Michelin exerted a profound impact on France's cultural identity in the twentieth century. His ambitious study offers a fresh perspective on both French social history in these years and the relationship between corporate culture and popular culture in the twentieth century. N° de ref. de la librería BTE9780801866517

"By reminding us that businessmen have deployed power and money to advocate causes, or that they have, through their products and their publicity, shaped our quotidian experiences, Harp's broadest contribution is to recognize that cultural history has much to gain by focusing on the producers as well as the consumers."

"Harp encourages us to rethink many of our assumptions regarding the oppositions between tradition and modernity and between national and regional identity... This book is a fascinating contribution to the literature on modernization, regionalism, and consumer culture in twentieth-century France, and it will be of interest to specialists and general readers alike."

"Harp's achievement is notable. He has offered a strong base on which to build further studies on the role of advertising in mass culture while contributing significantly to our understanding of French culture."

"Highly intelligent and engaging... Harp's sophistical blend of business and cultural history enriches both approaches and should serve as a model for other scholars."

"Stephen Harp has written a first-class advertising and cultural history that is both informative and engaging."

"Steven Harp's Marketing Michelin is a fascinating, well-researched book. His strengths as a historian and speaker of French are well displayed here. His archival work is also very impressive."

"This is a fine book... a thoughtful analysis of this world-famous icon from the perspective of class, race, nation, and gender... Handsomely produced, it is a good and worthwhile read."

"This lively and informative book will be of interest to anyone who has ever navigated their holidays with a Michelin map or one of their red or green guides."

"A coherent and useful contribution to debates concerning cultural modernity and French values."

"Harp argues that Michelin is a prime example of how businesses can reshape cultural attitudes and assumptions, particularly through advertising. He analyses the cultural assumptions of France, including representations of gender, race, and class, in a way that is lively, interesting, and informative."

Given the scarce nature of many of the books offered by this store, Orders usually ship within 5-15 business days. Book Depository is an international bookseller. We ship our books to over 100 countries around the globe and we are always looking to add more countries to the list. We really, really love books and offer millions of titles, currently over 10 million of them, with this figure increasing daily. Living by our motto, 'Bookseller to the World', we focus on offering as many titles as possible to as many customers as possible. Most of the within books offered within this ?Hard to find? store are dispatched within 10 - 15 business days of your order. Apart from publishers, distributors and wholesalers, we even list and supply books from other retailers! We hope you enjoy our selection and discover your new favourite book.


All books are shipped in new condition. We are happy to accept returns within 30 days of receipt. Given the scarce nature of many of our books, orders placed with ?Book Depository hard to find? usually ship within 5-15 business days. Domestic Shipments are sent by Royal Mail, and International by Priority Airmail. Please contact the seller directly if you wish to return an order. Name of business: The Book Depository Ltd Form of legal entity: A Limited Company Business address: The Book Deposito...


Given the scarce nature of many of the books offered by this store, Orders usually ship within 5-15 business days. Domestic Shipments are sent by Royal Mail, and International by Priority Airmail. We are happy to accept returns within 30 days of receipt. Please contact the seller directly if you wish to return an order.