ArtĒculos relacionados a Boswell's Life of Johnson: Including Boswell's... 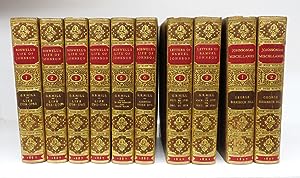 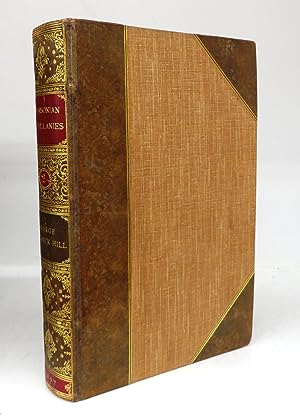 Boswell's Life of Johnson: Including Boswell's Journal of a Tour to the Hebrides and Johnson's Diary of a Journey into North Wales; Letters of Samuel Johnson; Johnsonian Miscellanies

Boswell's Life of Johnson (6 vols.): xxvii, 522; [6], 480; [4], 464; [4], 446; [6], 460; lxxiv, [2], 324 p. Letters of Samuel Johnson (2 vols.): lii, 423; [4], 476 p. Johnsonian Miscellanies (2 vols.): xv, 488; vii, 517 p. 23 cm. Life of Johnson contains 14 illustrations, including 4 portraits of Johnson, 1 portrait of Boswell, 5 samples of Johnson's writing, one item addressed to Johnson, map of the tour through Scotland, and a chart of Johnson's contemporaries. 8 of these illustrations are fold-outs. The Letters include one fold-out facsimile. Half leather bindings signed by Morrell Binder London. Spines in gilt with burgundy and brown labels. Slight chips to spine heads of Life Vol. 3, Letters Vol. I and Miscellanies Vol. I. Three of the brown labels have slight cracking. A little wear to lower spines in Boswell's Life Vol. I and Miscellanies Vol. I. Life Vol. I has a discolouration to title page and frontispiece opposite. Vol. 3 has small dent at bottom of front board and discoloured pages near beginning where a news clipping is placed. Small professional paper repair to pull-out illustration in first volume of Letters. Discolouration to tops of pp. 56 and 57 in Vol. I of Miscellanies. Bookplates of Frederick Cowan on front pastedowns. The London bindery of W. T. Morrell was established c. 1861 in Soho, London. Morrell s son W.J. Morrell took over the management in 1887 after his father s death, and subsequently brought his brother John into partnership. In 1891 an observer noted that W.J. & J. Morrell, at that time employing 50 people, preferred to bind all their work by hand and the gilding and the marbling of both paper and leather was also done on site. The editor of these works, George Birkbeck Hill (1835-1903), devoted himself to the study of English 18th-century literature, and gained a reputation as the most learned commentator on the works of Samuel Johnson. The elaborate six-volume edition of Boswell's Life of Johnson, included here, is a monumental work, invaluable to a student studying Johnson. A gorgeous set that will look magnificent on the shelf of any Johnson admirer. N░ de ref. de la librerĒa 120012

TĒtulo: Boswell's Life of Johnson: Including ...

Attic Books is one of the premier retail locations for antiquarian books and collectable books in Canada. We recently celebrated our thirtieth year in business. Please browse our select online stock on a wide range of subjects in books and paper collectables for the reader, scholar and the seasoned collector. Or come visit us in London, Ontario to enjoy the relaxed atmosphere of our three floor bookstore, enhanced by original tin ceilings, hardwood maple floors, and the arts & crafts fańade of our century building.


We guarantee the condition of every book as it's described on the Abebooks web
sites. If you're dissatisfied with your purchase (Incorrect Book/Not as
Described/Damaged) or if the order hasn't arrived, you're eligible for a refund
within 30 days of the estimated delivery date. If you've changed your mind about
a book that you've ordered, please use the Ask bookseller a question link to
contact us and we'll respond within 2 business days. Attic Books. 240 Dundas
Street, London, Ontario, Canada, N...


Orders usually ship within 2 business days. Shipping costs are based on books weighing about 1 KG. If your book order is heavy or oversized, we may contact you to let you know extra shipping is required. Canadian orders are shipped via Canpar courier; international orders are usually shipped via USPS.