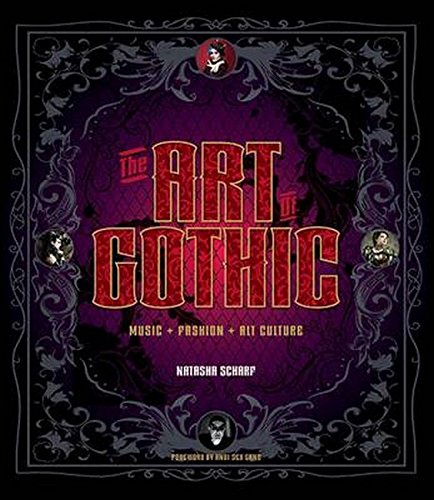 [English]
The Art Of Gothic, whether it's music, fashion or culture, has roots that can't be definitively nailed down, yet its branches extend well into popular culture, with art in all its permutations drawing from the darkness and melancholy of the gothic aesthetic. This book uses 400 artworks to chart the history of this striking and bold movement, compiled by Natasha Scharf, an authority on gothic culture.
From its beginnings as a subculture branching off from punk, musicians and artists embraced a new style, taking their lead from the widely-regarded first goth song 'Bela Lugosi's Dead' by the art-rock band Bauhaus in 1979. From this, the subculture has permeated everything from album covers to fashion, literature, cinema, computer games and fine art, even spawning its own collection of dark subgenres like pop-punk, industrial, steampunk and neo-noir.
Charting the history of the aesthetic of the gothic from its very beginnings to the present day, this fascinating visual journey provides a thoroughly striking record of the movement for which image is everything. Through the different iconography and styles within this large genre, readers will be awe-inspired by the sheer pervasiveness of the style and its colours. Far from being a depressing visual style, the beauty and intensity of the 400+ artworks in the volume will definitely excite fans of gothic, as well as those with an interest in art.
A collection as comprehensive and authoritative as this doesn't come along very often, and the odyssey from Post-Punk to contemporary cinema by way of Japanese gothic-Lolitas, videogames and the Vampire myth represents everything there is to know about this style, in stunningly vibrant images. The Art Of Gothic looks like a work of art in itself, and is essential reading for anyone interested to know more about this most wide-ranging genre.