Artículos relacionados a A Pilate's Primer: Return to Life Through Contrology...

Pilates, Joseph Hubertus; Miller, William A Pilate's Primer: Return to Life Through Contrology and Your Health

A Pilate's Primer: Return to Life Through Contrology and Your Health 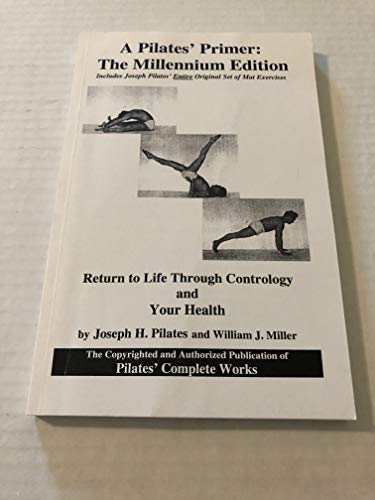 Customers interested in this book should look up the revised edition, now titled PILATES EVOLUTION, ( ISBN 978-1-928564-91-1), which includes the entire text of PILATES PRIMER, plus extensive new material. This older combination edition entitled Pilates Primer included both of the published works of Joseph Pilates, as does its Revised Edition, now titled Pilates Evolution. Both the older Primer and the revised edition, Pilates Evolution, contain the only authorized copies of the Library of Congress books originally written by Joseph Pilates in 1934 and 1945.
This Pilates Primer made available in one volume all of Pilates’ early Twentieth Century philosophies, principles, and theories about health and fitness, as well as the exercises, poses, and instructions fundamental to his exciting fitness program. You will also learn every single one of his original 34 mat exercises taught to his own students. Living testimony to the validity of his own teachings, Joseph Pilates shares in these writings his fundamental tenets of posture, body mechanics, correct breathing, spinal flexibility, physical education, and his law of natural exercises.

At the beginning of the First World War, Joseph Pilates was imprisoned in England along with many Germans who happened to be living at the time in and around Lancaster, England. He was a German national who had been boxing and performing in England prior to 1914. While living in the Camp, he taught other residents the series of exercises that he had developed for personal use over the preceding decades both in Germany and in England. His own exercise sets drew strongly from his studies of yoga and Zen, as well as ancient Roman and Greek exercise regimens.

1. A Pilates' Primer : The Millennium Edition

2. A Pilates' Primer : The Millennium Edition

3. A Pilates' Primer : The Millennium Edition

4. A Pilates' Primer : The Millennium Edition