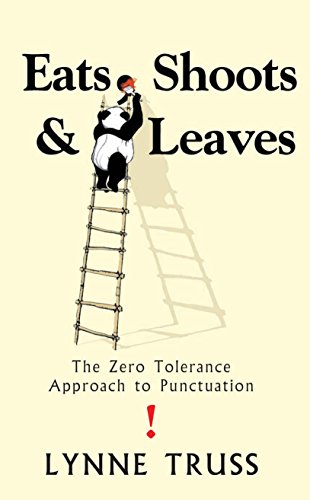 SOLD Everyone knows the basics of punctuation, yet we see ignorance and indifference everywhere. Its Summer! says a sign that cries out for an apostrophe. ANTIQUE, S, says another

Lynne Truss deserves to be piled high with honours... she feels a genuine affection for those little full stops and commas, colons and semi-colons. She wants them protected rather than revered, respected rather than worshipped, for the vital job they do. I think she probably understates her case when she argues that people who persist in writing "Good food at it's best" deserve to be "struck by lightning, hacked up on the spot and buried in an unmarked grave". Lightning strikes are altogether too random. There should be a government task force with the single duty of rooting out such barbarians and burning them at the stake. Happily, Truss is a funny writer and she has an eye for the grotesque. (John Humphrys Sunday Times)

Three cheers for Lynne Truss, the extremely droll sports-writer and comic novelist, whose book Eats, Shoots & Leaves makes the history of punctuation a subject at once urgent, sexy and hilarious...Her book is a joyous call to arms for grammatical sticklers everywhere, and I have signed up with delight (John Walsh Independent)

Eats, Shoots & Leaves has been a surprise UK bestseller. Every company meeting should begin with a reading from it, followed by a prayer of thanks for its existence (Michael Skapinker Financial Times)

[A] witty, clear-headed and altogether enchanting book ... It makes you love punctuation; you want to conserve what is still left and perhaps even call for more of it ... Reading this book put me in such a good mood that I came close to forgiving the people who use that modern punctuation atrocity, the "forward slash". (Oliver Pritchett Sunday Telegraph)

This book will stimulate and satisfy. It's worth it's weight in gold. (Boyd Tonkin The Independent)

It can only be a matter of time before the new government seizes the chance to appoint her [Lynne Truss] as minister for punctuation. The manifesto is already written. (The Guardian)

If Lynne Truss were Roman Catholic I'd nominate her for sainthood. As it is, thousands of English teachers from Maine to Maui will be calling down blessings on her merry, learned head for her book, Eats, Shoots & Leaves. It's a book about punctuation, the poor stepchild of mean old grammar.Punctuation, if you don't mind! The book is so spirited, so scholarly, so seductive, English teachers will sweep aside all other topics to get to, you guessed it, punctuation. Parents and children gather by the fire on chilly evenings to read passages on the history of the semi-colon and the much-maligned dash. Make way for the new Cinderella of the English language, Punctuation Herself! (Frank McCourt)

Ms Truss has had enough; to judge from the huge sales this book has had in its first few weeks, she has unearthed a vast army of supporters...If you have not done so already, buy a copy of this book, read it, absorb its message, then give it to a sub-literate friend or colleague for Christmas. (Beachcomber Daily Express)

Lovers of good English have thought of ourselves as isolated outposts...Lynne Truss has emerged as our champion. (William Hartson Daily Express)

A witty, entertaining, impassioned guide to perfect punctuation, for everyone who cares about precise writing. Not a primer but a 'zero tolerance' manual for direct action. A panda walked into a cafe. He ordered a sandwich, ate it, then pulled out a gun and shot the waiter. 'Why?' groaned the injured man. The panda shrugged, tossed him a badly punctuated wildlife manual and walked out. And sure enough, when the waiter consulted the book, he found an explanation. 'Panda,' ran the entry for his assailant. 'Large black and white mammal native to China. Eats, shoots and leaves.' We see signs in shops every day for "Banana's" and even "Gateaux's". Competition rules remind us: "The judges decision is final." Now, many punctuation guides already exist explaining the principles of the apostrophe; the comma; the semi-colon. These books do their job but somehow punctuation abuse does not diminish. Why? Because people who can't punctuate don't read those books! Of course they don't! They laugh at books like those! Eats, Shoots and Leaves adopts a more militant approach and attempts to recruit an army of punctuation vigilantes: send letters back with the punctuation corrected. Do not accept sloppy emails. Climb ladders at dead of night with a pot of paint to remove the redundant apostrophe in "Video's sold here".

1. Eats, Shoots and Leaves: The Zero Tolerance Approach to Punctuation