ArtĒculos relacionados a Out of Egypt: A Memoir

Aciman, Andre Out of Egypt: A Memoir 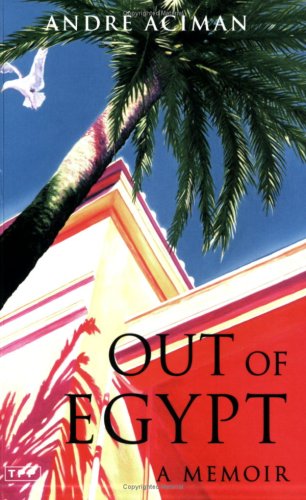 Set in Alexandria, this classic and much-loved memoir chronicles the exploits of Andre Aciman's colourful Sephardic Jewish family from its arrival in Egypt at the turn of the century to its forced departure three generations later. Aciman tells a story of childhood innocence, of intricate family life and the pain of exile from a place one loves. His memories are adorned with eccentric characters: mysterious Uncle Vili - soldier, salesman, Italian Fascist and British spy; the two grandmothers, the Princess and the Saint, who gossip in six different languages; his melancholy Aunt Flora who warns that Jews lose everything 'at least twice in their lives'; and his father, who considers converting to Islam in order to stay in Alexandria., Elegant, beautifully-written, moving and witty, "Out of Egypt" bridges cultures and generations and provides a moving portrait of a by-gone world.

"To find Alexandria in these pages, all rosy and clear-eyed from the tonic of Aciman's telling, is the greatest imaginable gift."--James Merrill "Out of Egypt is beautifully remembered and even more beautifully written. Aciman writes of a dazzling time and place populated by lavish and theatrical characters." --Los Angeles Times Book Review "A wonderful book...The sense of ceremony and magic in this memoir is as much from literature--Proust, Dante, Homer, the Alexandrian poet Cavafy--as from the narrator's actual world...Out of Egypt gives much pleasure." --Chicago Tribune "Andre Aciman has written a book of genuine grandeur. An extraordinary union of love and intelligence, Out of Egypt saves a time and a place from oblivion and fixes it forever, with unforgettable vividness. Happy is the writer who has suce a tale to tell, and tells it so beautifully; and happy is the reader."--Leon Wieseltier "This beautifully written book combines the sensuousness of Lawrence Durrell, the magic of Garcia Marquez, and the realism of intimate observation. A rich portrait of a surprising and now-vanished world."--Eva Hoffman "The past recaptured in [Aciman's] elegant memoir is full of cucumber lotion and Schubert melodies, Parmesan cheese and the clatter of backgammon chips--all the smells and the sounds of Alexandria that he knew before [leaving]."--The New Republic "A beautifully crafted memoir. [Out of Egypt] is the rare book you'll want to read again as soon as you reach the end."--The Jewish Week "This is not only the marvelous saga of a genuinely Levantine family but also the tale of a vanished and multicultural world from the Istanbul of the sultans to the Alexandria of Egypt up to Nasser and of the life of a young man doomed to say goodbye to its charms. A touching and highly amusing, masterfully written book." -Gregor von Rezzori "Out of Egypt is at once an elegy to a lost culture and a satire of one singularly cosmopolitan Sephardic family...Mr. Aciman paints an unflinching portrait of his picaresque clan."--Forward "Lovely...Mixes memory and imagination in seamless and beguiling ways...He may gave gone out of Egypt but, as this evocative and imaginative book makes plain, he has never left it, nor it him." --The Washington Post "With beguiling simplicity, [Aciman] recalls the life of Alexandria as [his family] knew it, and the seductiveness of that beautiful, polyglot city permeates his book.."--The New Yorker "Rich and moving...Aciman's pungent prose is filled with telling detail."--The Seattle Times "Andre Aciman calls this book a memoir, though it is richer than that, a chronicle of three generations of a family leading a cosmopolitan life in an Egypt that no longer exists."--The Boston Sunday Globe "Sand has obliterated a 60-year Alexandrian garden; or would have if Aciman had not restored it in the grace of language and memory."--Newsday "A marvelous memento of a place, time, and a people that have all disappeared." --Publishers Weekly (starred review) "Rich and captivating...this is not simply another nostalgic account but a well-written and touching depiction of life in a community that has almost ceased to be. Highly recommended."--Library Journal (starred review) "It is Mr. Aciman's great achievement that he has re-created a world gone forever now, and given us an ironical and affectionate portrait of those who were exiled from it." --The New York Times Book Review "remarkable...a mesmerising portrait of a now vanished world." --The New York Times Jewish Chronicle, 8 September 2006 'Out of Egypt is [Andre Aciman's] romantic, nostalgic, joyous memoir...the characters have a mythic quality and are fascinating to read about. Aciman brings them all back to clamorous life.' - Kate Saunders GEOGRAPHICAL 'It's a touching, vivid recollection and properly asks the unanswerable questions about memories that can't be shaken.'

Andre Aciman was born in Alexandria and raised in Egypt, Italy and France. He is Professor of Comparative Literature at the CUNY Graduate Center in New York City and is the author of False Papers as well as the editor and contributor to The Proust Project and Letters of Transit.

Descripci¾n Paperback. Condici¾n: Very Good. The book has been read, but is in excellent condition. Pages are intact and not marred by notes or highlighting. The spine remains undamaged. N║ de ref. del artĒculo: GOR002607167

Out of Egypt : A Memoir

Descripci¾n Condici¾n: Very Good. Ships from the UK. Used book that is in excellent condition. May show signs of wear or have minor defects. N║ de ref. del artĒculo: 39206055-20

Descripci¾n Paperback. Condici¾n: Good. Good condition is defined as: a copy that has been read but remains in clean condition. All of the pages are intact and the cover is intact and the spine may show signs of wear. The book may have minor markings which are not specifically mentioned. Most items will be dispatched the same or the next working day. N║ de ref. del artĒculo: wbb0018609412

Descripci¾n Condici¾n: Very Good. This book is in very good condition and will be shipped within 24 hours of ordering. The cover may have some limited signs of wear but the pages are clean, intact and the spine remains undamaged. This book has clearly been well maintained and looked after thus far. Money back guarantee if you are not satisfied. See all our books here, order more than 1 book and get discounted shipping. . N║ de ref. del artĒculo: 7719-9781845111496

Descripci¾n Condici¾n: Very Good. Shipped within 24 hours from our UK warehouse. Clean, undamaged book with no damage to pages and minimal wear to the cover. Spine still tight, in very good condition. Remember if you are not happy, you are covered by our 100% money back guarantee. N║ de ref. del artĒculo: 6545-9781845111496