Artículos relacionados a Project Azorian: The CIA and the Raising of the K-129

Polmar, Norman; White, Michael Project Azorian: The CIA and the Raising of the K-129

Project Azorian: The CIA and the Raising of the K-129 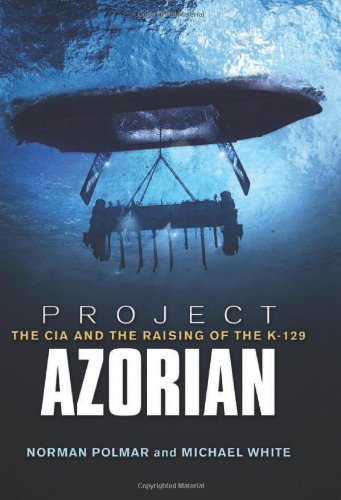 "An astounding book about an astounding technical collection operation. . . . I strongly recommend [Project Azorian]. [It is] well-written, [it is] accessible to an audience not au fait with the Cold War, and [it] serve[s] to undermine decades of speculation. * Canadian Military Journal * "The most incredible naval story never told - until now * Warships *

On July 21, 1974, despite incredible risks and after years of secret preparations, the CIA attempted to salvage the sunken Soviet ballistic missile submarine K-129 from the depths of the North Pacific Ocean. "Azorian" was the code name for the most ambitious ocean engineering endeavour ever, with the depth of 16,560 feet greatly surpassing that of the previous deepest attempt, a mere 245 feet. The operation was carried out despite the proximity of Soviet naval ships to the lift ship. The Soviet government had been warned about the plans and were concerned - the K-129 contained nuclear-armed torpedoes and missiles and crypto equipment. This book not only examines and details the salvage effort, but also short life of the resurrected submarine, from the sailing from its secret base, through to its transit to an appointment with disaster, the missed"burst" communication checks, and the subsequent Soviet search efforts. The book is based on Soviet documents, CIA reports and detailed analyses by a"board of experts", as well as scores of interviews with participants in Project Azorian, including several who were on board the lift ship as well as the Soviet "spy submarine". The book is based, in part, on the research for Michael White's documentary Azorian: The Raising of the K-129. About the Authors Norman Polmar is an analyst, consultant and author specialising in naval, aviation, and intelligence issues. Senior Consultant for National Security Programs at Gryphon Technologies, he has written more than forty books. Michael White has worked in film, television and advertising for over 34 years. He currently works around Europe as a director of over fifty commercials and some twenty corporate films.

5. Project Azorian: The CIA and the Raising of K-129 [Hardcover] Norman Polmar and Michael White