Artículos relacionados a Tropic of Orange 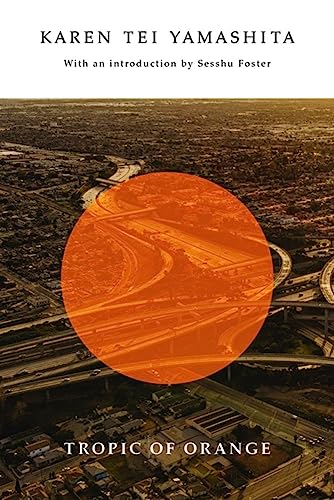 A reissue of Yamashita's classic, Tropic of Orange features a freshened design and introduction, giving it new readership Yamashita's novels are classics of Asian American literature, and this repackaging of three of her novels relocates them into a contemporary context and argues visually for their place in the canon Now more than ever, the intersectionality and politically charged nature of Yamashita's work makes an argument both for pluralism and for the difficult work of living together in shifting, demographically complex societies

Karen Tei Yamashita: Karen Tei Yamashita is the author of Through the Arc of the Rain Forest, Brazil-Maru, Tropic of Orange, Circle K Cycles, I Hotel, and Anime Wong, all published by Coffee House Press. I Hotel was selected as a finalist for the National Book Award and awarded the California Book Award, the American Book Award, the Asian/Pacific American Librarians Association Award, and the Association for Asian American Studies Book Award. She has been a US Artists Ford Foundation Fellow and co-holder of the University of California Presidential Chair for Feminist & Critical Race & Ethnic Studies. She is currently Professor of Literature and Creative Writing at the University of California, Santa Cruz.