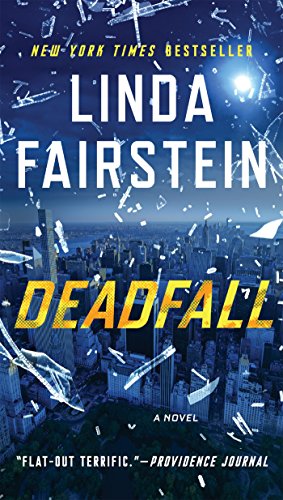 "A flat-out terrific crime novel by one of our finest crime writers."--Providence Journal

"Fairstein offers the rich tapestry of setting and the psychology behind the crime...she brings to her books a level of authenticity like few other authors."--BookReporter.com More Praise for Linda Fairstein "The Queen of Intelligent Suspense."--Lee Child "A champion teller of detective tales."--USA Today

"Alex Cooper is a fascinating heroine...based on the equally fascinating life of her creator."--O, The Oprah Magazine "One of the best crime fiction writers in America today."--Nelson DeMille "Fairstein is superbly attuned to the sinister vibes of the famous, as well as forgotten, New York City locales."--Maureen Corrigan, NPR.org

"Riveting....[Fairstein is] as good a writer as any in the genre, and with her latest, has elevated her talent to a level seldom seen in the genre."--Providence Journal "No one is better than Fairstein at meshing research with character and plot."--Connecticut Post Reseńa del editor:

A wild heart beats within New York City. Amid concrete and skyscrapers, the Wildlife Conservation Society works to preserve and protect the animal kingdom both within and beyond the borders of the five boroughs. But dangerous creatures don't always have claws and fangs, as Assistant DA Alexandra Cooper and NYPD detectives Mike Chapman and Mercer Wallace know all too well. Predators lurk close to home, and in the aftermath of the shocking assassination of an iconic public figure--someone Alex has worked with for years--the trio must unravel the motive behind the shooting to discover who is the bigger snake: the killer or the victim.

The murder investigation provides more questions than answers, as a tangled mess of secrets slowly comes to light. From street gangs to secret societies, from big-game hunting to the illegal animal trade, from New York City zoos to the highest offices in city government, Alex has her work cut out for her--especially since the task force handling the investigation, led by the US Attorney, seems to be more against her than with her. As tensions rise between Alex and the feds, she must determine just how far she is willing to go to uncover the truth--and uphold the integrity of the office she has so proudly served.

Descripción Dutton, 2018. Paperback. Condición: New. Carefully packaged and shipped within 24 hours! Most CDs and books have multiple editions; if you want a specific edition please ask via email.Book is in perfect condition and will be SHIPPED WITHIN 24 hours of receiving the order!. Nş de ref. del artículo: MX20-0378