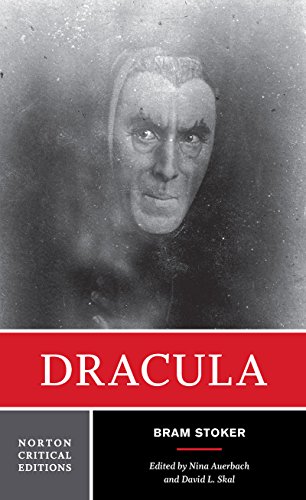 A rich selection of background and source materials is provided in three areas: Contexts includes probable inspirations for Dracula in the earlier works of James Malcolm Rymer and Emily Gerard. Also included are a discussion of Stoker's working notes for the novel and "Dracula's Guest," the original opening chapter to Dracula. Reviews and Reactions reprints five early reviews of the novel. "Dramatic and Film Variations" focuses on theater and film adaptations of Dracula, two indications of the novel's unwavering appeal. David J. Skal, Gregory A. Waller, and Nina Auerbach offer their varied perspectives. Checklists of both dramatic and film adaptations are included. Criticism collects seven theoretical interpretations of Dracula by Phyllis A. Roth, Carol A. Senf, Franco Moretti, Christopher Craft, Bram Dijsktra, Stephen D. Arata, and Talia Schaffer. A Chronology and a Selected Bibliography are included.

Bram Stoker (1847-1912), an Irish novelist and short story writer, was known during his lifetime as the personal assistant of actor Henry Irving and business manager of the Lyceum Theatre in London, which Irving owned, but is best known today for his 1897 Gothic novel Dracula. Nina Auerbach is John Welsh Centennial Professor of History and Literature and Professor of English at the University of Pennsylvania. She is the author of Communities of Women: An Idea in Fiction; Woman and the Demon: The Life of a Victorian Myth; Romantic Imprisonment: Women and Other Glorified Outcasts; Ellen Terry, Player in Her Time; Private Theatricals: The Lives of the Victorians; and Our Vampires, Our Selves. She is co-editor, with U. C. Knoepflmacher, of Forbidden Journeys: Fairy Tales and Fantasies by Victorian Women Writers. David J. Skal is a leading American cultural historian and critic of horror films and Gothic literature. The author of The Monster Show and Hollywood Gothic, he lives in Glendale, California.