Artículos relacionados a The Europeans: Three Lives and the Making of a Cosmopolitan...

Figes, Orlando The Europeans: Three Lives and the Making of a Cosmopolitan Culture

The Europeans: Three Lives and the Making of a Cosmopolitan Culture 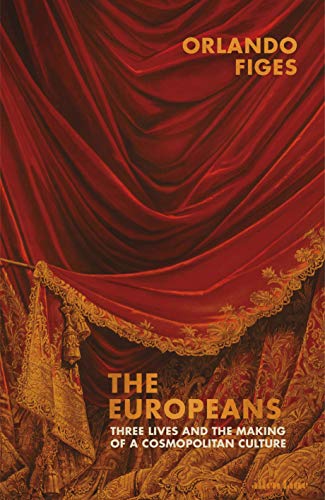 Magnificent. Beautifully written, immaculately researched and thoroughly absorbing from start to finish. A tour de force that explains how Europe's cultural life transformed during the course of the 19th century - and so much more. (Peter Frankopan)

Magnificent and utterly gripping: European identity, culture and commerce through the lives of three remarkable individuals, the book for our times. (Philippe Sands)

It plunged me into another world. I learned so much and was carried away by the intelligence and fluidity of the style - a combination which is unbeatable. (Antonia Fraser)

[There are] a multitude of fascinating pieces of information to be gleaned from Orlando Figes's magisterial and wide-ranging book The Europeans ... Relevant, trenchant and searching. (William Boyd The Guardian)

Meticulously detailed, exhaustively researched and written with Figes's characteristic verve, The Europeans is a sweeping tour de force and a monumental work of historical synthesis. (Julian Coman The Observer)

Figes in his maturity is a fine, subtle writer with a nice eye for detail and clever with structure. I finished the book entertained, informed and armed with the kinds of insights and questions that will keep me happily going for the rest of the year. (David Aaronovitch The Times)

Remarkable ... Orlando Figes is a fine historian who combines scholarly detail with readability. His wide-ranging book touches on a multitude of subjects. But at its heart is a love triangle - the very human story of three remarkable individuals whose lives he has resurrected with great sympathy and insight. (Nick Rennison Daily Mail)

Extraordinary ... It is a world of cultural sophistication and emotional complexity played out against a backdrop of breath-taking economic and technological progress. (Lesley Chamberlain Financial Times)

Orlando Figes's majestic, passionately engaged The Europeans could hardly be more timely. Huge in scope yet packed with detail, it's a riveting account of the emergence of 19th-century pan-European culture ... Most thought-provoking is how alive this history still feels today. (Steph Power BBC Music Magazine)

SELECTED AS BOOK OF THE YEAR 2019 BY THE TIMES, DAILY TELEGRAPH, DAILY MAIL, SPECTATOR AND BBC HISTORY MAGAZINE

'Magnificent. Beautifully written, immaculately researched and thoroughly absorbing from start to finish. A tour de force that explains how Europe's cultural life transformed during the course of the 19th century - and so much more.' Peter Frankopan

'The Europeans is a massively impressive work, as enjoyable as it is knowledgeable, full of insights into the mechanisms of history and in the people who make it. It is a book about the making of Europe, and this description, wonderful as it is, has now, in these days, sadly, also almost a utopian quality to it. Orlando Figes is an outstanding historian and writer, he brings distant history so close that you could feel its heartbeat. He did it with the Russian Revolution in A People's Tragedy, and he does it again in The Europeans.' Karl Ove Knausgaard

'Magnificent and utterly gripping: European identity, culture and commerce through the lives of three remarkable individuals, the book for our times.' Philippe Sands

From the bestselling author of Natasha's Dance, The Europeans is a richly enthralling, panoramic cultural history of nineteenth-century Europe, told through the intertwined lives of three remarkable people: a great singer, Pauline Viardot, a great writer, Ivan Turgenev, and a great connoisseur, Pauline's husband Louis. Their passionate, ambitious lives were bound up with an astonishing array of writers, composers and painters all trying to make their way through the exciting, prosperous and genuinely pan-European culture that came about as a result of huge economic and technological change. This culture - through trains, telegraphs and printing - allowed artists of all kinds to exchange ideas and make a living, shuttling back and forth across the whole continent from the British Isles to Imperial Russia, as they exploited a new cosmopolitan age.

The Europeans is Orlando Figes' masterpiece. Surprising, beautifully written, it describes huge changes through intimate details, little-known stories and through the lens of Turgenev and the Viardots' touching, strange love triangle. Events which we now see as central to European high culture are made completely fresh, allowing the reader to revel in the sheer precariousness with which the great salons, premieres and bestsellers came into existence.