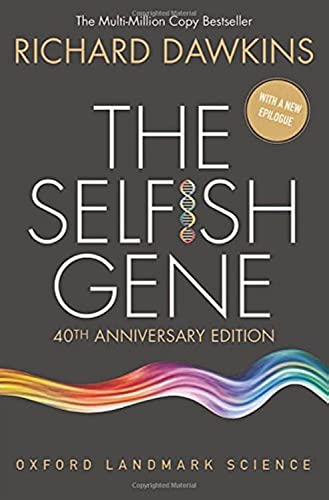 The million copy international bestseller, critically acclaimed and translated into over 25 languages. As influential today as when it was first published, The Selfish Gene has become a classic exposition of evolutionary thought. Professor Dawkins articulates a gene's eye view of evolution - a view giving centre stage to these persistent units of information, and in which organisms can be seen as vehicles for their replication., This imaginative, powerful, and stylistically brilliant work not only brought the insights of Neo-Darwinism to a wide audience, but galvanized the biology community, generating much debate and stimulating whole new areas of research. Forty years later, its insights remain as relevant today as on the day it was published. This 40th anniversary edition includes a new epilogue from the author discussing the continuing relevance of these ideas in evolutionary biology today, as well as the original prefaces and foreword, and extracts from early reviews., Oxford Landmark Science books are 'must-read' classics of modern science writing which have crystallized big ideas, and shaped the way we think.

In 1976, The Selfish Gene became the first real blockbuster popular science book, a poetic mark in the sand to the public and scientists alike: this idea had to enter our thinking, our research and our culture... The Selfish Gene has attained its own literary and scientific immortality: as long as we study life, it will be read. (Adam Rutherford, The Observer)

Dawkins's prose is lucid and powerful, his argument difficult to contend ... The Selfish Gene has attained its own literary and scientific immortality: as long as we study life, it will be read. (Adam Rutherford, The Observer)

Books about science tend to fall into two categories: those that explain it to lay people in the hope of cultivating a wide readership, and those that try to persuade fellow scientists to support a new theory, usually with equations. Books that achieve both changing science and reaching the public are rare. Charles Darwin's On the Origin of Species (1859) was one. The Selfish Gene by Richard Dawkins is another. From the moment of its publication 40 years ago, it has been a sparkling best-seller and a scientific game-changer (Matt Ridley, Nature)

Richard Dawkins' magnificent introduction to the world of popular science writing ... Punchy, elegant, self-righteous, devotional (at least in a Dawinian way), it showed that genetics was absorbing, challenging and important (Nick Spencer, The Tablet)

Professor Richard Dawkins is one of the most influential science writers and communicators of our generation. He was the first holder of the Charles Simonyi Chair of the Public Understanding of Science at Oxford, a position he held from 1995 until 2008, and is Emeritus Fellow of New College, Oxford. His bestselling books include The Extended Phenotype (1982) and its sequel The Blind Watchmaker (1986), River Out of Eden (1995), Climbing Mount Improbable (1996), Unweaving the Rainbow (1998), A Devil's Chaplain (2004), The Ancestor's Tale (2004), and The God Delusion (2007). He has won many literary and scientific awards, including the 1987 Royal Society of Literature Award, the 1990 Michael Faraday Award of the Royal Society, the 1994 Nakayama Prize for Human Science, the 1997 International Cosmos Prize, and the Nierenberg Prize for Science in the Public Interest in 2009.