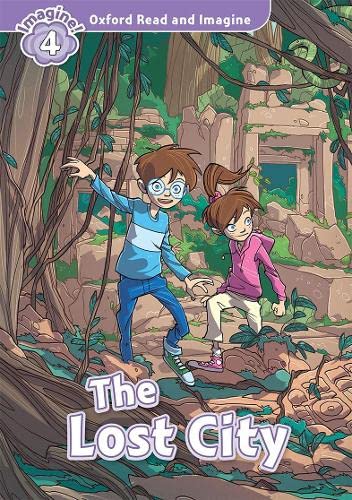 Oxford Read and Imagine is a fiction series written for primary and pre-primary students. Young learners follow Rosie, Ben and Grandpa on their adventures and grow up with the characters as they read and learn.

In the rainforest, there is a Lost City of Gold. And in the Lost City, there is a beautiful gold statue. Ben, Rosie, and Grandpa visit the city with Silvia, an archaeologist. But other people know about the city too, and want that statue...

Descripción Paperback. Condición: New. UK ed. Language: English. Brand new Book. Watch your students grow up with Rosie and Ben as they enjoy reading at the right level. The language is carefully graded so the Readers are easy to use alongside any coursebook or for reading alone. A powerful partnership with the non-fiction series Oxford Read and Discover means students can explore the same topic through fact and fiction. Read an adventure set in Africa's Serengeti, Can You see Lions? and then find out more about how animals use camouflage in Oxford Read and Discover Camouflage. Learners can complete activities whilst reading or after reading - some with supporting activities for the Cambridge Young Learner Test. Picture dictionaries and glossaries help with unknown words along the way. Nş de ref. del artículo: LIB9780194723633