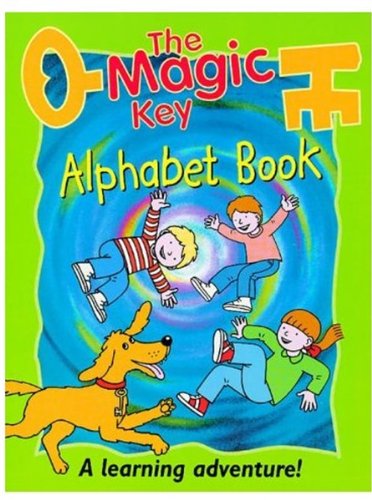 To tie-in with the launch of The Magic Key on BBC television, Oxford University Press is publishing six activity books. These are black and white books featuring the characters from The Magic Key adventures, and they provide educationally sound, carefully structured activities which are lots of fun too. The Magic Key Alphabet Book is a great way of helping children learn their alphabet. The Magic Key is to be a major 26 part BBC television series featuring the characters from Oxford Reading Tree. The Oxford Reading Tree characters are recognized by children in virtually all primary schools, and know and loved by parents and children. This is the first time BBC Education and BBC children's have jointly invested in a children's TV series. It will be shown on both. Transmission dates to be confirmed. The series is produced by HIT Entertainment, makers of Kipper, Percy the Park Keeper and Bob the Builder programmes.

Descripción Paperback. Condición: Very Good. Shipped within 24 hours from our UK warehouse. Clean, undamaged book with no damage to pages and minimal wear to the cover. Spine still tight, in very good condition. Remember if you are not happy, you are covered by our 100% money back guarantee. Nş de ref. del artículo: 6545-9780192724410

Descripción Paperback. Condición: Very Good. Magic Key Alphabet Book (The magic key) This book is in very good condition and will be shipped within 24 hours of ordering. The cover may have some limited signs of wear but the pages are clean, intact and the spine remains undamaged. This book has clearly been well maintained and looked after thus far. Money back guarantee if you are not satisfied. See all our books here, order more than 1 book and get discounted shipping. . Nş de ref. del artículo: 7719-9780192724410

Descripción Paperback. Condición: Very Good. The book has been read, but is in excellent condition. Pages are intact and not marred by notes or highlighting. The spine remains undamaged. Nş de ref. del artículo: GOR002010288