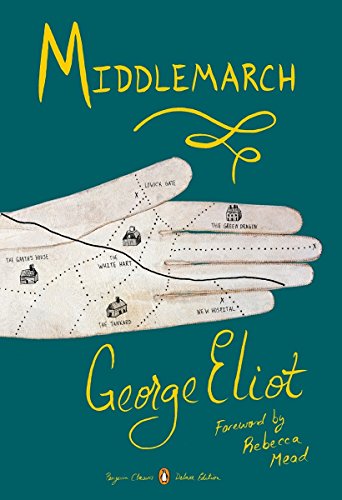 "Middlemarch, the magnificent book which with all its imperfections is one of the few English novels written for grown-up people." --Virginia Woolf "The most profound, wise and absorbing of English novels . . . and, above all, truthful and forgiving about human behaviour." --Hermione Lee "No Victorian novel approaches Middlemarch in its width of reference, its intellectual power, or the imperturbable spaciousness of its narrative...I doubt if any Victorian novelist has as much to teach the modern novelists as George Eliot...No writer has ever represented the ambiguities of moral choice so fully". --V. S. Pritchett "Middlemarch is probably the greatest English novel." --Julian Barnes "It is possible to argue that Middlemarch is the greatest English novel." --A. S. Byatt "Certainly the greatest [English] novel." --Martin Amis

Considered one the masterpieces of realist fiction, George Eliot's novel, Middlemarch: A Study of Provincial Life, explores a fictional nineteenth-century Midlands town in the midst of modern changes. The quiet drama of ordinary lives and flawed choices are played out in the complexly portrayed central characters of the novel-the idealistic Dorothea Brooke; the ambitious Dr. Lydgate; the spendthrift Fred Vincy; and the steadfast Mary Garth. The appearance of two outsiders further disrupts the town's equilibrium-Will Ladislaw, the spirited nephew of Dorothea's husband, the Rev. Edward Casaubon, and the sinister John Raffles, who threatens to expose the hidden past of one of the town's elite.

Middlemarch : A Study of Provincial Life