Artículos relacionados a An Economic History of the U.S.S.R. (Pelican S.)

Nove, Alec An Economic History of the U.S.S.R. (Pelican S.)

An Economic History of the U.S.S.R. (Pelican S.) 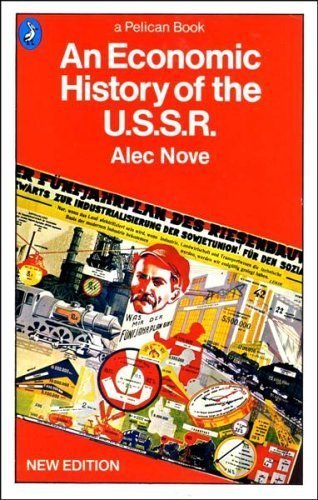 A concise and objective study of the growth of a country, tracing the economy of the USSR throughout the 20th-century. From War Communism, to the new economic policy of the early 1920s and to the economy under Stalin's coercion. This included the Soviet "great leap forward" of five-year- plans, collectivization and Stakhanovism. The author's account of these years of terror reveal not only his close acquaintance with the Soviet sources, but also his ability to divine the historical facts through a mist of propaganda. After a brief survey of the distorted economy of the Second World War and of Malenkov and Krushchev, with their well-intentioned but often hare-brained schemes to expand the economy, he concludes with a notably fair-minded assessment of Russian achievement to date.

1. An Economic History of the USSR (Pelican)

Descripción Paperback. Condición: Very Good. An Economic History of the USSR (Pelican) This book is in very good condition and will be shipped within 24 hours of ordering. The cover may have some limited signs of wear but the pages are clean, intact and the spine remains undamaged. This book has clearly been well maintained and looked after thus far. Money back guarantee if you are not satisfied. See all our books here, order more than 1 book and get discounted shipping. Nş de ref. del artículo: 7719-9780140228236

2. An Economic History of the USSR (Pelican) -- SECOND EDITION

Descripción Paperback. Condición: Very Good. Shipped within 24 hours from our UK warehouse. Clean, undamaged book with no damage to pages and minimal wear to the cover. Spine still tight, in very good condition. Remember if you are not happy, you are covered by our 100% money back guarantee. Nş de ref. del artículo: 6545-9780140228236