Artículos relacionados a Revel for Understanding the Political World: A Comparative... 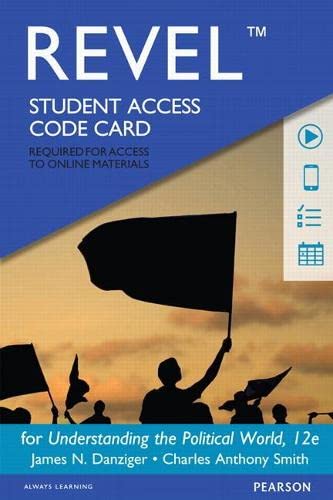 REVEL for Understanding the Political World gives students deeper insight into the continually evolving nature of international politics. Presenting key concepts, relevant research findings, and detailed explanations, the Twelfth Editionoffers students a path to understanding the challenges of politics and political differences. The text explores the subject matter from a comprehensive and comparative standpoint, using real examples from different international political systems to demonstrate how politics are understood throughout the world. By directly questioning students to understand and explain what they know, REVEL for Understanding the Political World brings an abstract subject into focus by relating it to students' opinions and lives. Through real examples of political institutions and processes, students can better understand the nature of global politics. REVEL is Pearson's newest way of delivering our respected content. Fully digital and highly engaging, REVEL offers an immersive learning experience designed for the way today's students read, think, and learn. Enlivening course content with media interactives and assessments, REVEL empowers educators to increase engagement with the course, and to better connect with students. NOTE: REVEL is a fully digital delivery of Pearson content. This ISBN is for the standalone REVEL access card. In addition to this access card, you will need a course invite link, provided by your instructor, to register for and use REVEL.

James N. Danziger is a Research Professor of Political Science at the University of California, Irvine, where he also has served as Chair of the Department of Political Science, campus-wide Dean of Undergraduate Education, and Chair of the Academic Senate. He is recipient of many honors and awards, including a Marshall Scholarship (to Great Britain), a Foreign Area Fellowship, Woodrow Wilson Fellowship, Phi Beta Kappa, and an IBM Faculty Award. He received the first UC Irvine Distinguished Faculty Lectureship Award for Teaching in 1987, the UC Irvine Distinguished Service Award in 1997, and the campus' highest honor, the Extraordinarius Award in 2009. His Ph.D. is from Stanford University, and he has held visiting appointments at the universities of Aarhus (Denmark), Pittsburgh, and Virginia. His research has received awards from the American Political Science Association and the American Society for Public Administration. He has published extensively, particularly on information technology and politics, and been an active participant in local politics. Charles Anthony Smith received his PhD in political science from the University of California-San Diego (2004) and his JD from the University of Florida (1987). He is an Associate Professor at the University of California-Irvine. His books include The Rise and Fall of War Crimes Trials: from Charles I to Bush II (NY: Cambridge University Press, 2012), and Globalizing Human Rights (NY: Routledge 2014). He has published articles in Law & Society Review, Political Research Quarterly, Justice System Journal, International Political Science Review, Judicature, Journal of Human Rights, Election Law Journal, Studies in Law, Politics & Society, Human Rights Review, Journal of International Relations & Development among other journals and published chapters in edited volumes with Cambridge University Press, Oxford University Press, and University of Pennsylvania Press, among others. He has served as guest editor for special issues of the Journal of Human Rights and Human Rights Review. His research considers the role of courts, law, and litigation in the contestation over a variety of types of rights. He considers this unifying research theme using a variety of methodologies in the context of the United States, in comparative contexts, and in the realm of international relations and globalization. He has won a variety of awards for both his teaching and research.