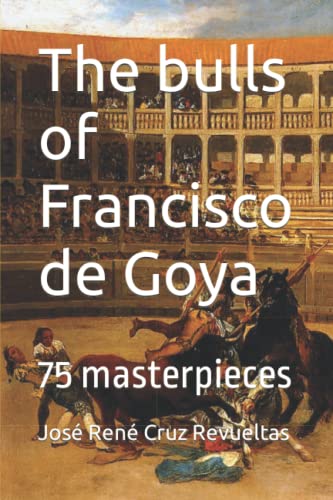 Descripción Paperback. Condición: New. Language: English. Brand new Book. Goya was always, in addition to being a painter, a Spaniard, and fundamentally an Aragonese. He never despised his birthplace or his origin but rather showed, through his art, his knowledge of Spanish customs and traditions. His passion was Spain: his land, sun, and love. Goya could not banish his fondness for good wine, bulls, and women from his heart.Bullfighting, art as Spanish as Spain itself, and Goyesque as Goya himself: light, beauty, aesthetics with the frame, and the possibility of grotesque death in a sadomasochistic act, which transforms joy into anguish, beauty into ugliness, life in pain and death.The bulls are the Spanish national festival that could define Goya and Spain itself.Spain was born from the triumph of absolutist Christianity over the Moors and the Jews. That grows with the wealth of its colonies. But with the establishment of the holy inquisition, he condemns his people to live under terror and suspicion. Wherever there is a desire and transgression, no matter how small, there is sin and the possibility of brutal punishment in this life or Hell.Spain that after its initial greatness, consumes itself. And that by the time of Goya, it has become the Spain of Don Quixote, of Lazarillo de Tormes, of Buscón, where the good years are behind us. You have to defend yourself with everything to dream and survive.And it is in the festival of the bull where the Spanish people find a catharsis against that unequal, unjust, corrupt world where the decadent court lives in luxury, deceit, and lies.In the Bulls, where there can be no lies because courage cannot be hidden, it faces beauty, art, and grace as equals with the most real truths that we know: fear, pain, and death.Goya was famous for his drunkenness, love affairs with maidens and married women, and a distinctive sign of his character, his fondness for bullfighting. He often signed his letters as "Francisco, the one with the bulls."As a young man, Goya tried to apply for a fellowship at the Royal Academy of Arts in Madrid, twice being turned down. Before him, there was room for those recommended from the larger provinces, mainly Andalusians and Castilians. And he, being an Aragonese with no influence at court, a stranger without work, a hillbilly and ignorant, despite his solid national roots, could not obtain any position. So, to survive, he secured a certain amount of money by fighting bulls in provincial arenas.Now in his eighties, Goya continued to flaunt his erudition in matters of bullfighting, bullfighters, and bullrings. He also boasted that he could still give the most colorful bull passes, which says much about his temperament and personality.In the following pages, you will be able to observe the series of La Tauromaquia that consists of 33 engravings that Francisco de Goya published in 1816. These works were elaborated slowly, without a specific plan. You will also appreciate the works of the "Bulls of Bordeaux" series painted between 1824 and 1825 in the French city of Bordeaux.Unlike ]La Tauromaquia], these works reflect professional bullfights and the sets of well-known bullfighters. Together with the bullfighters, the collective brutalization of the masses is reflected. There are also several works by Goya where the theme is bullfighting. Nş de ref. del artículo: AAV9798831265552