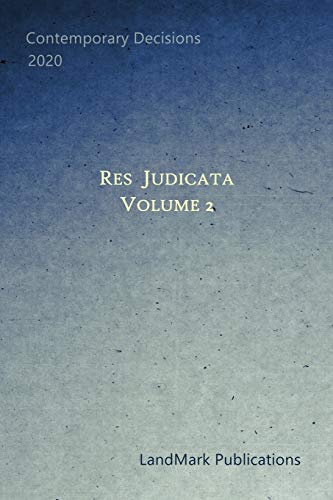 Descripción Independently Published, United States, 2020. Paperback. Condición: New. Language: English. Brand new Book. THIS CASEBOOK contains a selection of U. S. Court of Appeals decisions that analyze, interpret and discuss the doctrine of res judicata. Volume 2 of the casebook covers the Sixth through the Eleventh Circuit Court of Appeals. * * * "A claim is barred by the res judicata [or claim preclusive] effect of prior litigation if all of the following elements are present: '(1) a final decision on the merits by a court of competent jurisdiction; (2) a subsequent action between the same parties or their privies; (3) an issue in the subsequent action which was litigated or which should have been litigated in the prior action; and (4) an identity of the causes of action.'" Browning v. Levy, 283 F.3d 761, 771 (6th Cir. 2002) (quoting Bittinger v. Tecumseh Prods. Co., 123 F.3d 877, 880 (6th Cir. 1997)). Trustees Operating Eng'rs v. Bourdow Contracting, 919 F. 3d 368 (6th Cir. 2019) * * * "Res judicata"-otherwise known as claim preclusion-"is applicable whenever there is (1) an identity of claims, (2) a final judgment on the merits, and (3) privity between parties." Tahoe-Sierra Pres. Council, Inc. v. Tahoe Reg'l Planning Agency, 322 F.3d 1064, 1077 (9th Cir. 2003) (internal quotation marks omitted). Here, the district court held that because these elements were met, claim preclusion barred VVV from asserting any claims based on the '654 mark. We assume, without deciding, that the district court correctly applied the elements of claim preclusion to this case. But we find that an exception to claim preclusion applies. * * * Under the Restatement (Second) of Judgments, an exception to claim preclusion applies if "[t]he plaintiff was unable to rely on a certain theory of the case or to seek a certain remedy or form of relief in the first action because of the limitations on the subject matter jurisdiction of the courts" and "the plaintiff desires in the second action to rely on that theory or to seek that remedy or form of relief." Restatement (Second) of Judgments § 26(1)(c). This exception recognizes that the general rules of claim preclusion are "predicated on the assumption" that "no formal barriers" prevented a litigant from presenting all of his "theories of recovery or demands for relief" in the court "in which the first judgment was rendered." Id., cmt. c. If "formal barriers in fact existed and were operative against [the] plaintiff in the first action," however, "it is unfair to preclude" a litigant from bringing a second action relying on new theories or seeking new relief and the general rule does not apply. Id.; see also Restatement (Second) of Judgments § 25, cmt. e. VVV & Sons Edible Oils v. Meenakshi Overseas, 946 F. 3d 542 (9th Cir. 2019). Nş de ref. del artículo: APC9798668900404