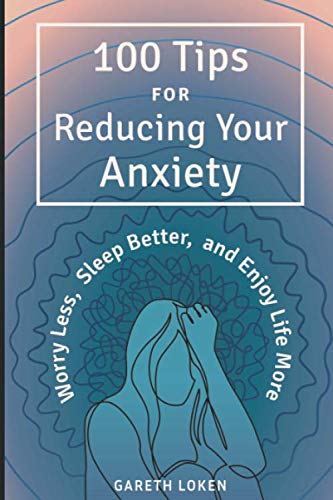 Descripción Independently Published, United States, 2020. Paperback. Condición: New. Language: English. Brand new Book. If your anxieties keep you wake at night, you're not alone. Research indicates that roughly one-third of the population suffers moderate to severe anxiety at some point in their lives. That's a lot of anxiety that does nobody any good, and the COVID-19 pandemic isn't helping. Social restrictions, economic insecurity, and general uncertainty are taking their toll on people who already struggle with worry and fear.Unlike self-help books that ask you to follow a complicated step-by-step program to control your anxiety, 100 Tips for Reducing Your Anxiety offers 100 fast and easy suggestions for coping with your anxiety. Select the tips that work best for you, and start sleeping better tonight.The following are some sample tips from 100 Tips for Reducing Your Anxiety.Tip #4: Turn Off the NewsThe journalist's motto is "If it bleeds, it leads." In other words: The more violent and bloody the event, the more you'll see of it.As an anxious person, do you really need to see nonstop coverage of murders, rapes, mass shootings, child molestations, natural disasters, war, genocide, and every other atrocity that humanity has to offer? No, you do not.Self-described "news junkies" obsessively follow their chosen news channel, usually the outlet that matches their political beliefs. So, in addition to reading about, hearing about, or watching the worst things that happen on Earth, they also get to be spectators at nasty political battles as the commentators inflate local, domestic, and world events with incendiary political rhetoric. "But," you may say, "I need to be an informed person. I can't just bury my head in the sand and pretend that the world doesn't exist. I can't be an airhead who exists in my own private bubble."Fair enough. Read your local community newspaper (it needs your support) and subscribe to a weekly news magazine. The Week will do a great job of keeping you informed while offering multiple perspectives on the same story. Tip #12. Tune Out of PoliticsThere's a good chance you have pretty strong political beliefs. Right or left, conservative or liberal, centrist or progressive, Red or Blue, coastal or center-of-the-country, Northeast or South, California or Texas: You know what you think, and nobody's going to convince you otherwise. Yes, occasionally (VERY occasionally) there will be debates and Q&A sessions between level-headed people exploring the pros and cons of a given issue, but you'll have to search hard to find such respectful back-and-forth. But, even after you've listen to the most eloquent pro-Choice or pro-Life advocate speak, will you change your views on abortion? After you've watched two people duke it out over Second Amendment rights versus the number of gun deaths in the United States each year, will your opinion about gun control have changed? No. With rare exceptions, your opinions will remain the same as they have always been. You may think, therefore, that it makes sense for you to listen to, watch, or otherwise tune into media that support your beliefs. Why, then, does watching your favorite news channel make you frantic with anxiety? The answer is simple: What lies beneath the reporting of the "news" is the desire to whip you up into a frenzy, to solidify your loathing for the other side, and to addict you to a never-ending cycle of anger, even rage.What can you do? Stop giving the media control over your emotions. Tune out. Turn off CNN or Fox. reading Instead of listening to far-right or far-left radio talk-show hosts, download podcasts that teach you about history, philosophy, literature, or any non-political topic that interests you."But," you may be thinking, "Why should I jettison my deeply held beliefs?" The answer is: You should not, but work within a realistic range of possibilities. Donate to the causes you believe in, and write to your congressional representatives. Nş de ref. del artículo: APC9798666107966