The Chronicles - Issue 001: Kenya's Undocumented Past 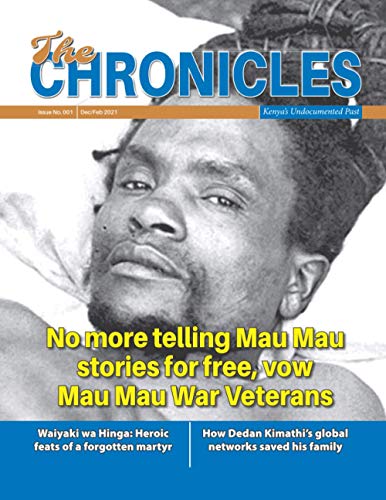 Descripción Independently Published, United States, 2020. Paperback. Condición: New. Barnabas Kimani Ilustrador. Language: English. Brand new Book. The Chronicles is a Kenyan periodical whose objective is to tell untold account of the country's past. A lot of history of this East African state, which was colonized by the British remain indefinable. Several events that took place during this period of colonization was mainly communicated by foreigners who apparently had very little or no understanding about the country before the coming of the Europeans. So, most of what is in public knowledge about Kenya's past may not reflect the real picture of the struggle people had made to free themselves from foreign domination.One of the main focus will therefore be on efforts made by freedom fighters across the country to liberate Kenya from colonial rule. Not everything has been captured by our historians and writers about this struggle. And since most of the freedom fighters are in their twilight years, this is the time to record what has not been told or documented. The Chronicles Magazine will also be exploring what was left behind by the so called White Settlers who for years made Kenya their home. Of course what is remembered about colonial history in Kenya is oppression and total disregard of the rights of the indigenous people - some of who found themselves landless following alienation of their land. The settlers who were allocated this property left behind a legacy the present and future generations would be interested in. The land in what was known as the White Highlands is for instance responsible for conflicts that always results to ethnic violence. Another area of interest is the old magnificent buildings with unique architectural designs the settlers built. Almost 60 years since the settlers exit, most of these constructions --- now at the hands of locals who bought the land -- are still standing. The Kenyan Government took over some of them and converted them into office blocks. These are structures with rich history. And those who know about them having been workers of the settlers who owned them have a story to tell. But in the next few years, these senior citizens most of who are octogenarians may not be there. In a nutshell the periodical will be documenting what has not been told and sharing this history with the rest of the world. Nş de ref. del artículo: APC9798581863275