Artículos relacionados a Timothy Scott Trilogy: Books 1-3 in the Behind The...

Alexander, Tobey Timothy Scott Trilogy: Books 1-3 in the Behind The Mirror Series: 5

Timothy Scott Trilogy: Books 1-3 in the Behind The Mirror Series: 5 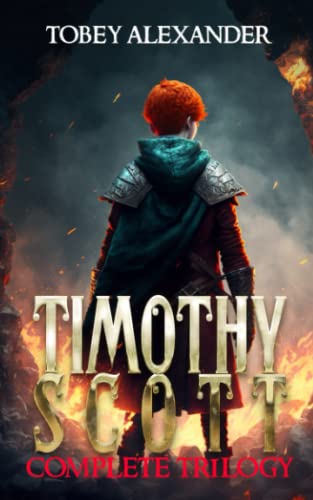 Timothy Scott Trilogy: Books 1-3 in the Behind The Mirror Series (Paperback)

Descripción Paperback. Condición: New. Language: English. Brand new Book. Haunted by a nightmare, one boy must overcome his fears to become a new world's hero. In our world, twelve-year-old Timothy Scott fades into the shadows. Bullied and ridiculed he discovers an enchanting world hidden behind an antique mirror and in a heartbeat everything changes. Can he become a hero and save a world from a sinister darkness? When Timothy discovers Mielikuvitus, he finds himself thrust on a path that needs him to be a hero. For the first time you can immerse yourself in the entire trilogy of Timothy's adventures in this three book box set. Follow Timothy from start to finish in his epic journey from outcast boy to a hero, brave enough to face the nightmarish Dark Entity that threatens to destroy everything he holds close to him. Filled with magic, wonder, enchantment and adventure the Timothy Scott series brings you a new hero to follow on an epic journey. The complete trilogy of the award-winning series will drag you into a fantastical world filled with magic, wonder, enchantment and heart. Take the entire journey and watch Timothy grow from an insecure young boy to a young man who must face his own demons and protect a world he has come to love. For fans of Harry Potter, Percy Jackson and Narnia this is the perfect addition to your shelves. Originally created as a story for the author's autistic son, this is a story about celebrating being vulnerable and accepting our differences to become the hero we may not believe ourselves to be. This is more than an adventure, this is a journey, a journey where our hero must overcome the hardest of things.self-doubt.Timothy's journey will leave you wishing you could join him in going through the mirror. AWARDS? Winner - Best Feature Screenplay (adaptation) - Golden Wheat Awards International Cinema Community 2021? Winner - Best Feature Screenplay - International Monthly Online Film Competition 2021? Winner - Best Feature Script - Accord Cine Fest 2021 Your next adventure awaits: ? Dive into a world filled with action, adventure, mystery and magic.? Journey through an enchanting world filled with rich characters, curious creatures and enticing myths and history. ? Experience a coming of age adventure filled with friendship, danger, growth and intrigue.? Fall in love with a young hero as he overcomes his greatest fears and realizes the hero inside himself.? Enjoy epic fantasy, magic, enchantment, battles and stealth. About this series: Genre: Epic fantasy, sword & sorcery, action & adventure, coming of age, fantasy & dience: Middle-grade, teen, young adult, adult.Setting: Mythical world in a parallel setting, quasi-medieval powered by magic and enchantmentReader age: 8+Explicit language: pleteness: Complete trilogy of Timothy's adventures with plans to expand the wider series with new characters and adventures.Similar/influenced by: Harry Potter, The Chronicles Of Narnia, Percy Jackson, His Dark Materials, Lord Of The Rings, The NeverEnding Story and epic journeys/adventures of younger heroes. Nş de ref. del artículo: AAV9798533635707

Timothy Scott Trilogy: Books 1-3 in the Behind The Mirror Series