Artículos relacionados a Revolution is My Name: An Egyptian Woman's Diary...

Revolution is My Name: An Egyptian Woman's Diary from Eighteen Days in Tahrir 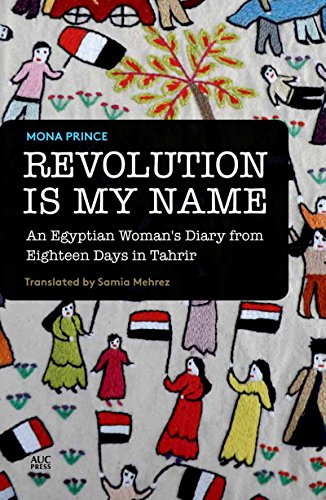 "For thinking about how the collective memory of revolution is being created right now, even as the revolution regains its steam, there is no better place to start than with Mona Prince's remarkable memoir of the 25 January Uprising. Revolution is My Name (Ismi Thawra) tells the story of revolution as it unfolds over eighteen days. It is a literary memoir in the best sense of the word. By this, I mean that it expresses and reflects on, rather than documents a set of lived experiences. Moreover, it is not merely a story about the unfolding of a revolution as told by a participant who was there. Arguably, the more important story is about the character of the narrator developing as an evolving, complicated revolutionary." Elliott Colla, Jadaliyya; "Prince's prose is experientially unsettling and yet irrationally jovial, much like the iconic eighteen days she so vividly helps us relive. As revolution drifts further into individual and communal memory, Prince's retelling will remain a stubborn testament to the moments of hopeful triumph over the status quo." Adel Iskandar, scholar of Arab Studies, Georgetown University, Washington DC; "This book offers a first rate discussion of all the important issues with which Egypt and Egyptians of different classes, genders, generations, ethnic groups, and political orientations continue to struggle. It encourages its readers to stay tuned to see what the Egyptian revolution, and those funny and unpredictable Egyptians, will eventually deliver." Mervat F. Hatem, Professor of Political Science, Howard University, Washington DC; "Revolution is My Name is a beautifully written, detailed text, bringing together Facebook statuses, discussions on the streets, at home, and with friends, life on a daily basis in Tahrir, conversations with military and police soldiers, and much more. A must read for anyone interested in the experiential level of the revolution." Atef Said, Visiting scholar and lecturer in Sociology, the University of Illinois at Chicago; "Revolution is My Name is an essential read for anyone who wishes to understand, not just the overthrow of Mubarak, but also the Arab Spring and the challenges that many in the Middle East face when it comes to democratization." William Eichler, LSE Review of Books

A writer, a university professor, a woman: this is the insightful and humorous description of one hesitant revolutionary's experiences through the eighteen days of the Egyptian uprising that led to the fall of President Hosni Mubarak in January/February 2011. Juggling humor and horror, hope and fear, certitude and anxiety, Prince immerses us in each day's unexpected and inconclusive details, as she meets other writers and intellectuals involved in the demonstrations. Mixing the political and the personal, the public and the private, she exposes both her family's conservative politics and her own classist prejudices against other sectors of Egyptian society, all of whom teach her lasting transformative lessons.There are moving descriptions of the brutal violence of the security forces against demonstrators, the daily battles of resistance, and the author's own abduction and beating at the hands of the police, but she also paints scenes of exceptional solidarity, perseverance, and humanity, while weaving in conversations with fellow demonstrators, new-found friends, and street children, as well as police conscripts and officers. She describes her fears for her sister, who disappears on the day of the infamous Battle of the Camel, their decision to join the sit-in, cooking for the protesters, singing and dancing in the cold to sustain energy during the long nights, and sleeping by the army tanks to stop them from moving in. Revolution Is My Name is a testimony not only of women's participation in the Egyptian uprising and their courage in confronting constrictive gender divides at home and on the street but equally of the important contribution of women writers as chroniclers of the momentous events of January and February 2011.

1. Revolution Is My Name: An Egyptian Woman's Diary from Eighteen Days in Tahrir