Kalhana's Rajatarangini: v. 1, 2, 3: A Chronicle of the Kings of Kashmir

Kalhana's Rajatarangini: v. 1, 2, 3: A Chronicle of the Kings of Kashmir 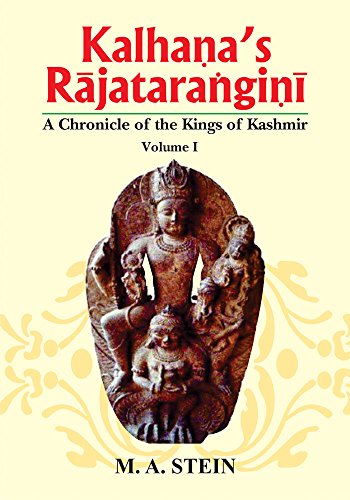 Kalhana s Rajatarangini is the oldest and fullest record of Kashmir history. Sir Stein, recognising the inestimable value of the only work of its kind, succeeded in publishing the critical edition of the text as in 1892 which has been printed here as Vol. III. Later he followed this illustrious venture by presenting a fully annotated translation of the Chronicle, in two volumes, printed as Vol. I and Vol. II, the former containing the translation of the first seven tarangas from the original Sanskrit and the later that of the remaining eighth taranga. The translation is preceded by a comprehensive and scholarly Introduction in which Stein has endeavoured to elucidate in the first place the data which can be gathered as regards the person of Kalhana, his family and the milieu in which he lived. In the second chapter (of the Introduction) the author has ex-amined as closely as our available materials would permit, the objects and methods which guided Kalhana in the composition of his work, the sources he used for it, and the form which he gave to his narrative. The condition in which the text of the Chronicle has been handed down to us, and the materials the author has used for its reconstitution, are discussed in the third chapter, while the text chapter contains an exposition of Kalhaha s system of chronology. In the concluding and longest chapter of the Introduction it has been the author s object to present a critical summary of Kalhana s narrative and of the historical data contained in it. The Chronological and Genealogical Tables attached to the Introduction are intended to present in condensed form the information fur-nished by the Rajatarangini regarding the date and descent of successive rulers of Kashmir. The Memoir which follows (Vol. II) the Translation and Notes, pre-sents a connected and detailed account of the ancient geography of Kashmir.

Descripción PAPERBACK. Condición: New. Book Cover and ISBN may be different from US edition but contents as same US Edition. Excellent Quality,Quick delivery, We may ship the books from Asian regions for inventory purpose. Our courier service is not available at PO BOX. Nş de ref. del artículo: nt_9788120803688