Artículos relacionados a Introduction to Algorithms 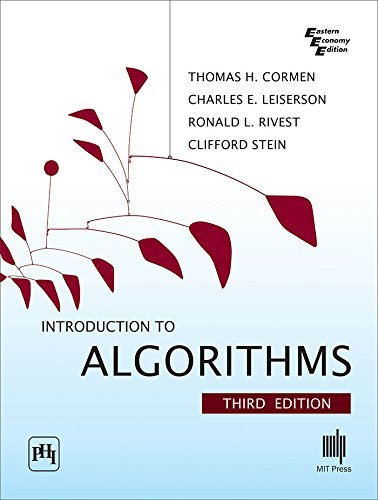 "As an educator and researcher in the field of algorithms for over two decades, I can unequivocally say that the Cormen et al book is the best textbook that I have ever seen on this subject. It offers an incisive, encyclopedic, and modern treatment of algorithms, and our department will continue to use it for teaching at both the graduate and undergraduate levels, as well as a reliable research reference."
—Gabriel Robins, Deptt. of Computer Science, University of Virginia

"Introduction to Algorithms, the 'bible' of the field, is a comprehensive textbook covering the full spectrum of modern algorithms: from the fastest algorithms and data structures to polynomial-time algorithms for seemingly intractable problems, from classical algorithms in graph theory to special algorithms for string matching, computational geometry, and number theory. The revised third edition notably adds a chapter on van Emde Boas trees, one of the most useful data structures, and on multithreaded algorithms, a topic of increasing importance."
—Daniel Spielman, Deptt. of Computer Science, Yale University

"In light of the explosive growth in the amount of data and the diversity of computing applications, efficient algorithms are needed now more than ever. This beautifully written, thoughtfully organized book is the definitive introductory book on the design and analysis of algorithms. The first half offers an effective method to teach and study algorithms; the second half then engages more advanced readers and curious students with compelling material on both the possibilities and the challenges in this fascinating field."
—Shang-Hua Teng, University of Southern California

Thomas H. Cormen received bachelor’s degree in Electrical Engineering from the Princeton University way back in 1978. Thereafter, he did his master’s in Electrical Engineering and Computer Science from the MIT. Among the students, he is best known for having co-authored a book titled 'Introduction to Algorithms'. In the year 2013, he published another book titled 'Algorithms Unlocked'. This book too has been received well.