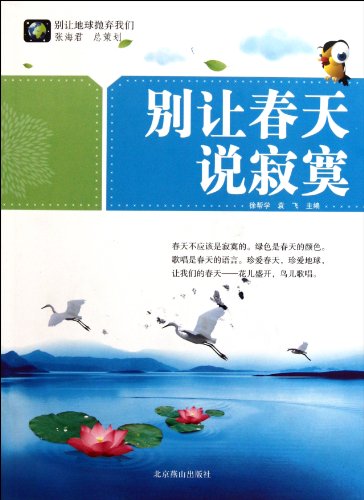 Descripción Beijing Yanshan Press, 2011. paperback. Condición: New. Ship out in 2 business day, And Fast shipping, Free Tracking number will be provided after the shipment.Pages Number: 195 Publisher: Beijing Yanshan Pub. Date :2011-09-01 version 1. Do not let that lonely spring to help study by Xu. Fei Yuan editor. Do not let that lonely spring. as follows: spring. in people's minds should be green. green represents spring. trees recover. green is a lively. beautiful and healthy vocabulary. we need to green the earth. Our lives need the green. However. in recent years. the spring should have some green. but in gradually disappeared as the desert continues to expand. the birds sing less and less. gradually exists only in our memory . . development should not be at the expense of the environment price. because we human beings should not desire to own a home and destroy the appearance of our existence! Green earth needs. human needs spring! Between people and the environment should be a harmonious relationship. We humans not only to vigorously strengthen scientific and technological progress. but also to make rational use of resources; no longer the destruction of the ecological environment and the direction toward the improvement. Human beings should follow a natural. economic. social and sustainable development of lasting coordinated way. this kind of understanding for each of us. especially young students is of great significance. Let us work together to make our planet away from the no flowers of Silent Spring. Spring said we must not let loneliness! Contents: Chapter I see: the beauty of a planet was the Earth Mother of the vicissitudes of life / 1 Second. the unique cradle of life / 2 Third. the Earth Song of Life / 5. four. East African Warrior story / 7 Fifth. the Earth the first six billion citizens born / 12 six biomes on Earth / 14 seven. beautiful natural scenery / 21 Chapter spring. this should not be so lonely one. what should be the spring / 27 Second. the birds. this is how the / 28 Third. the sale and development of butterfly / 30 Fourth. where the spring / 35 five. could not such a nature / 38 six. the spring will still do / who is also my Chapter 40 sunny one. in London shocked the world by the smoke Speaking / 46 Second. the global umbrella of an ozone / 48 Third. has been called the air of death. the acid rain / 52 Fourth. the El Nino and La Nina / 55 Fifth. the cool unspeakable Earth high fever / 57 six. there are dust storms in the spring / 59 seven. the water crisis can not be ignored / 62 eight. contaminated marine / 66 nine. desertification / 70 X. The tragedy of the Amazon rainforest / 73 eleven No birds in the spring / 76 XII who make us choke / 77 Chapter IV of the Earth can not be separated. and ultimately in the spring one. obedience. or change / 81 Second. the ecological impact of human existence will be destroyed / 82 Third. the human health is inseparable from animal / 86 Fourth. safeguard the environment for human survival - vegetation / 89 Fifth. the land that feeds us / 91 six. hope for the future - marine / 96 seven. our common home / Chapter 103 for the spring . a human continuous efforts to save the Earth's structure / 105 Second. the Kyoto Protocol the gains and losses / 106 Third. the climate stars: Stern and Gore / 108 Fourth. the Bali Roadmap / 111 Fifth. a About CAP (emissions) of global game / 114 Sixth. the European model: economic transition to a low carbon / 119 seven. the evolution of the United States: how to deal with what the carbon / 124 eight. Japan's strategy: Building a low carbon economy Declaration / 132 9. China in operations. prospects remain favorable / 135 Chapter VI Earth the way we live determines the fate of one. select the green costumes. piercing green / 138 Second. we should recognize that the green / 142 Third. the green house a good life / 143 four. green travel. new energy-saving fashion / 145 Fifth. water conservation. starting with me / 150 six. save food. low-carbon living / 155 seven species of the next tree. retain. Nş de ref. del artículo: LH6503