Artículos relacionados a Both Sides of the Chessboard

Byrne, Robert; Nei, Iivo Both Sides of the Chessboard

Both Sides of the Chessboard 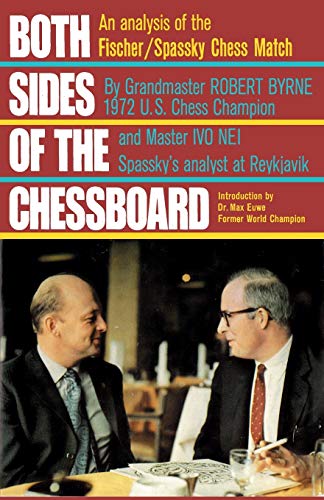 An analysis of the 1972 World Championship Chess Match from both sides of the chessboard - a Russian and an American analysis. After all the "rush" books on the most dramatic chess confrontation in history - Bobby Fischer vs. Boris Spassky - have had their brief dry in the sun, this deeply considered and unique volume makes its bid for classic status. International Grandmaster ROBERT BYRNE, distinguished chess columnist for The New York Times and the 1972 U.S. Chess Champion, who is justly famed for the thoroughness, accuracy and penetrating insight of his chess analysis: He debunks much of the erroneous analysis published within weeks of the match in books admirable for their timeliness but understandably lacking in depth; He provides a new view of the games since he is aware of the tensions and psychological burdens of both great masters.' International Grandmaster IVO NEI, a Spassky confidant, one of Russia's leading theoreticians and a member of the Soviet team at Reykjavik - and himself a brilliant annotator: He reveals many intriguing secrets of the match for the first time anywhere; He sheds new light on the hitherto dark side of Soviet chess, pre-match preparations. The definitive book on the match . . . objective, thorough, revealing, penetrating . . . no chess lover will want to be without.

Robert Byrne was born in Brooklyn, New York on April 20, 1928. He was the 1972 U.S. Chess Champion. He was also The New York Times chess columnist. He became an international master in 1952 and a grandmaster in 1964. Byrne won third prize at the 1973 Leningrad Interzonal, which qualified him for the Candidates Matches. A graduate of Yale, Byrne was an Honorary Director of the Manhattan Chess Club as well as an International Best Games Judge. Robert Byrne died in Ossining New York on April 12, 2013. IVO NEI won the junior chess championship of the Soviet Union in 1948. He has been national chess champion of Estonia six times. He became an international master in 1964, winning the Beverwijk International Tournament ahead of 8 grandmasters, including Bent Larsen and Lajos Portisch. In the Tallinn International Tournament, 1969, he shared second place with Paul Keres. A physicist by profession, he is director of a chess school in Tallinn. He has been the trainer and the second to Nona Gaprindashvili, women's world chess champion. He was trainer of the Soviet Team in the European Championship in Austria, 1970. In the 1972 World Championship Match, he was one of Spassky's seconds. He resides in Tallinn, Estonia with his wife.

1. Both Sides of The Chessboard

2. Both Sides of the Chessboard

3. Both Sides of the Chessboard