Artículos relacionados a Arban's complete celebrated method for the cornet:... 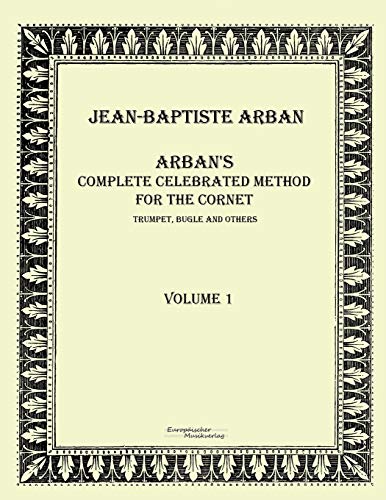 Reprint of the best-known and most widely used all over the world school for trumpet and other brass instruments by Jean-Baptiste ARBAN. This book contains the complete volume 1. Biographical Sketch of Joseph -Jean -Baptiste-Laurent Arban This illustrious artist was born at Lyons, France, February 28, 1825. He entered the Conservatory at an early age, taking up the study of the trumpet under Dauverne, and won first prize in 1845. His military term was passed in the navy on board the "La Belle Poule," whose chief musician, Paulus, became Chief Musician of the Garde ŕ Paris during the reign of Napoleon III. After having been professor of Saxhorn at the Military school (1857), he was elected professor of Cornet at the Conservatory January 23, 1869. After attending to these duties for a term of five years, Arban left the Conservatory for six years, returning again in 1880. He was the most brilliant cornet player of his time, and his astonishing performances and triumphant concert tours throughout Europe were the means of establishing the Valve Cornet as one of the most popular of all musical instruments. Arban's artistic ideals, sound musicianship and invaluable instructive principles were perpetuated in his splendid "Method for the Cornet," which has succeeded in maintaining the very highest position among similar instructive works and which has never been surpassed in point of practical superiority or artistic plan. Arban died at Paris on April 9, 1889. He was an officer of the Academie, Knight of the Order of Leopold of Belgium, of Christ of Portugal, and of Isabella the Catholic, and of the Cross of Russia.

3. Arbans Complete Celebrated Method for the Cornet (Paperback or Softback)