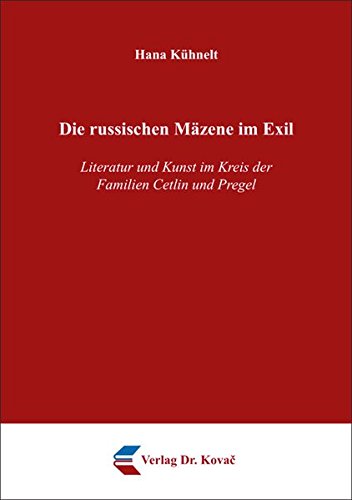 The extensive size of emigration at the beginning of the 20th century led to a considerable reduction of patronage in Russia. Financial support of artists on a regular basis in the tradition of 19th century Russia now shifted with individual patrons to their countries of exile. A small number of families were particularly committed to preserve Russian culture in exile. The central theme of this dissertation is to explore the motives behind their willingness to donate private funds for public purposes. Their actions were based upon their intellectual interests and their clear perception of literature and art, because many of them were artists and writers themselves. They became key figures in 'migr' communities and had a profound influence on Russian life abroad. The central issue of this study is the encounter of Russian 'migr's with the cultural elites of their host countries in the West. While religious motives as well as aspirations for integration and assimilation were mentioned in this context, the interrelations between patronage and Jewish tradition were not perceived as particularly relevant. Being representatives of a cultural elite, these families who acted as patrons identified themselves with the social circles of the Russian 'migr' communities in Berlin, Paris and New York. They were mainly concerned with literary and editorial activities focusing on the new collective history in exile. Their willingness to take part in Russian cultural life in exile was rooted in their identification with the collective suffering and shaped by their personal interest. Previous research implies that these writers regarded themselves as Russians, although they acted in the Jewish tradition. Among other things, this dissertation throws new light on Jewish cultural history of the 20th century. The emigration of Russian Jews to the West after 1917 brought about a new and prosperous revival of Russian literature and Russian visual arts, which would have not have (...)