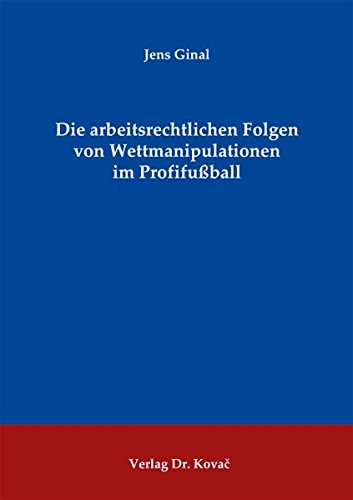 German professional football is shocked by bribery scandals at regular intervals. During the first great scandal for the German Bundesliga in the 1970s, clubs and their functionaries operated as initial point. In 2005, the bribery of referees and footballers by the international betting Mafia caused the so-called Hoyzer-scandal. In the following years, international investigations of the betting mafia leads to Germany. In view of a rapidly growing market of sports betting via internet, manipulations are also expected in the coming years. In this context for clubs the question arises to take what kind of labour law-related measures against players who are suspected to have an agreement with the betting mafia. The author investigates how this may leads to consequences under labour law, if the club is able to utter an immediate termination unless demonstrating serious misconduct by players. After investigating the validity of dismissal on grounds of suspicion, the author examines whether the club has the right to terminate the contract unilaterally and with immediate effect if the player is suspected of manipulation - especially when the club could face economic disadvantages by an important business partner. The author also outlines whether a player has a possibility for liability claims after his dismissal. Finally the book addresses the relevant issue of contractual conditions in this context.