Artículos relacionados a Computational Fluid Dynamics for Engineers: From Panel...

Computational Fluid Dynamics for Engineers: From Panel to Navier-Stokes Methods with Computer Programs 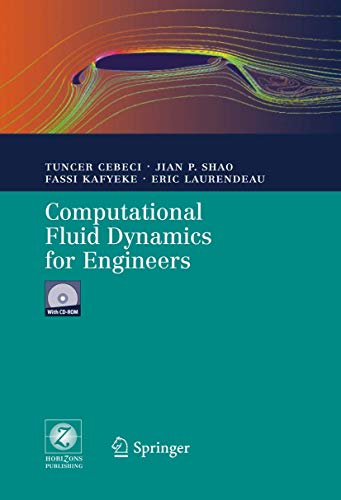 "The narrow range of analytic solutions or solutions with little numeric effort requires the development of powerful computational fluid dynamics (CFD). ... The aim of this book is to introduce CFD. ... Most of the chapters include some examples with solutions and at the end a greater number of problems for own studies. The book is very useful for students and practising engineers." (Bernd Platzer, ZAMM - Zeitschrift für Angewandte Mathematik und Mechanik, Vol. 86 (11), 2006)

"This book is intended for use in the classroom, as the textbook for a two-semester course for advanced undergraduate and first-year graduate students. ... this book provides a solid introduction to CFD ... ." (Pasquale Cinella, AJAA-Journal, Vol. 44 (11), 2006)

History reminds us of ancient examples of fluid dynamics applications such as the Roman baths and aqueducts that fulfilled the requirements of the engineers who built them; of ships of various types with adequate hull designs, and of wind energy systems, built long before the subject of fluid mechanics was formalized by Reynolds, Newton, Euler, Navier, Stokes, Prandtl and others. The twentieth century has witnessed many more examples of applications of fluid dynamics for the use of humanity, all designed without the use of electronic computers. They include prime movers such as internal-combustion engines, gas and steam turbines, flight vehicles, and environmental systems for pollution control and ventilation. Computational Fluid Dynamics (CFD) deals with the numerical analysis of these phenomena. Despite impressive progress in recent years, CFD remains an imperfect tool in the comparatively mature discipline of fluid dynamics, partly because electronic digital computers have been in widespread use for less than thirty years. The Navier-Stokes equations, which govern the motion of a Newtonian viscous fluid were formulated well over a century ago. The most straightforward method of attacking any fluid dynamics problem is to solve these equations for the appropriate boundary conditions. Analytical solutions are few and trivial and, even with today's supercomputers, numerically exact solution of the complete equations for the three-dimensional, time-dependent motion of turbulent flow is prohibitively expensive except for basic research studies in sim­ ple configurations at low Reynolds numbers. Therefore, the "straightforward" approach is still impracticable for engineering purposes.