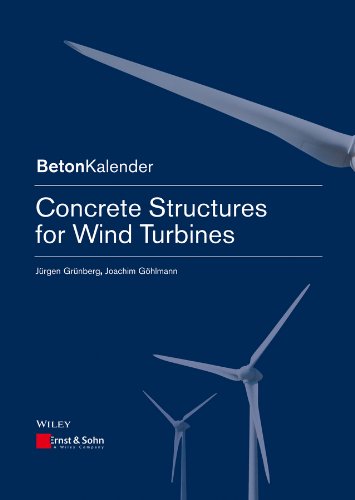 The wind energy industry in Germany has an excellent global standing when it comes to the development and construction of wind turbines. Germany currently represents the world's largest market for wind energy. The ongoing development of ever more powerful wind turbines plus additional requirements for the design and construction of their offshore foundation structures exceeds the actual experiences gained so far in the various disciplines concerned. This book gives a comprehensive overview for planning and structural design analysis of reinforced concrete and pre-stressed concrete wind turbine towers for both, onshore and offshore wind turbines. Wind turbines represent structures subjected to highly dynamic loading patterns. Therefore, for the design of loadbearing structures, fatigue effects - and not just maximum loads - are extremely important, in particular in the connections and joints of concrete and hybrid structures. There multi-axial stress conditions occure which so far are not covered by the design codes. The specific actions, the nonlinear behaviour and modeling for the structural analysis are explained. Design and verification with a focus on fatigue are adressed. The chapter Manufacturing includes hybrid structures, segmental construction of pre-stressed concrete towers and offshore wind turbine foundations. Selected chapters from the German concrete yearbook are now being published in the new English "Beton-Kalender Series" for the benefit of an international audience. Since it was founded in 1906, the Ernst & Sohn "Beton-Kalender" has been supporting developments in reinforced and prestressed concrete. The aim was to publish a yearbook to reflect progress in "ferro-concrete" structures until - as the book's first editor, Fritz von Emperger (1862-1942), expressed it - the "tempestuous development" in this form of construction came to an end. However, the "Beton-Kalender" quickly became the chosen work of reference for civil and structural engineers, and apart from the years 1945-1950 has been published annually ever since.

Jurgen Grunberg, Univ.-Prof. Dr.-Ing., studied civil engineering at the Technical University Berlin and at the University Hannover where he gained his doctorate from. Following eight years as project manager at HOCHTIEF AG and at IMS, Ingenieurgemeinschaft Meerestechnik und Seebau, since 1983 as consulting engineer and since 1986 as test engineer for structural engineering, he became professor for concrete construction at the University Hannover in 1993. Already since 1980 he deals with design and construction of offshore structures, telecommunication towers and later on of wind turbine towers. Professor Grunberg is a member of numerous national and international expert commissions in the fields of reinforced concrete and the author of a large number of books and articles. Joachim Goehlmann, Dr.-Ing., studied structural engineering at the Leibniz University Hannover where he completed his doctorate with the doctorate thesis ?Damage calculation of concrete constructions for wind turbines subjected to multi-stage and multi-axial fatigue loading?. Dr. Goehlmann has been involved with the design, manufacture and measurement of towers and foundations for wind turbines for over 13 years. Since 2010 he has been managing director at grbv Ingenieure im Bauwesen GmbH in Hannover, Germany. grbv is an independent planning and consulting company for structural design of towers and support structures for on- and offshore wind farms.