Artículos relacionados a Polymer and Photonic Materials Towards Biomedical Breakthrou... 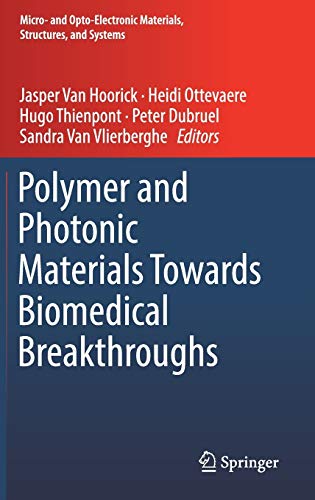 <P>THIS BOOK OFFERS A COMPLETE&NBSP;OVERVIEW OF&NBSP;PHOTONIC-ENHANCED MATERIALS FROM MATERIAL DEVELOPMENT TO A FINAL PHOTONIC BIOMEDICAL APPLICATION. IT INCLUDES&NBSP;FUNDAMENTAL, APPLIED, AND INDUSTRIAL PHOTONICS.&NBSP;THE AUTHORS COVER SYNTHESIS, THE MODIFICATION AND THE PROCESSING OF A VARIETY OF (BIO)POLYMERS INCLUDING THERMOPLASTS (E.G. POLYESTERS) AND HYDROGELS (E.G. PROTEINS AND POLYSACCHARIDES) FOR A PLETHORA OF APPLICATIONS IN THE FIELD OF OPTICS AND REGENERATIVE MEDICINE.&NBSP;&NBSP;</P>

This book offers a complete overview of photonic-enhanced materials from material development to a final photonic biomedical application. It includes fundamental, applied, and industrial photonics. The authors cover synthesis, the modification and the processing of a variety of (bio)polymers including thermoplasts (e.g. polyesters) and hydrogels (e.g. proteins and polysaccharides) for a plethora of applications in the field of optics and regenerative medicine.

MSc. Jasper Van Hoorick (08/12/1989) holds an FWO grant (presented by the Research Foundation Flanders) as a joint PhD student at the faculty of Sciences of Ghent University in the Polymer Chemistry & Biomaterials Research group (PBM) and at the Faculty of Engineering at the Vrije Universiteit Brussel in the Brussels Photonics group (B-PHOT). In his PhD research he focusses on the development of novel biodegradable polymer materials including aliphatic polyesters as well as hydrogels and their processing into membranes for ocular tissue regeneration. During this research a large focus lies into additive manufacturing. To this end, two-photon polymerization is one of the major processing techniques he applies during this research. In 2014 he graduated as a Master of Science: Chemistry at Ghent University. During his master thesis he focussed on developing scaffolds for spinal tissue engineering, for which he received the Agoria Award for Technological Master dissertations in 2014. He authored 6 Web of Science Core Collection cited papers. Furthermore, he authored 1 book chapter and was an invited speaker at the XXIV International Materials Research Congress in 2015.

Prof. Dr. Ir. Heidi Ottevaere is a full professor at the Faculty of Engineering of the Vrije Universiteit Brussel (VUB) since October 1st 2009. She is responsible for the Instrumentation and Metrology platform at the Photonics Innovation Center and for the research unit ‘biophotonics’ of the Brussels Photonics Team B-PHOT. She is coordinating and working on multiple research and industrial projects focusing on the design, fabrication and characterization of different types of components and systems in the field of biophotonics, interferometry, holography and imaging. For this research she makes use of the B-PHOT polymer prototyping platform including a NanoScribe two-photon polymerization system, an ultraprecision Moore diamond tooling machine and a Jenoptik hot embossing machine. She graduated from the Vrije Universiteit Brussel in 1997 as an electrotechnical engineer with majors in Photonics and received her PhD degree in Applied Sciences in 2003 from the same university. Heidi Ottevaere has made research efforts in fundamental, applied and industrial photonics. She authored more than 168 Web of Science cited papers; her WoS h-index is 17 and her Google scholar h-index 23. She was promotor of 10 PhDs, edited 2 conference proceedings or special journal issues, authored 7 chapters in books, was key-note/invited speaker at more than 25 international conferences, and is co-inventor of 2 patents. Heidi has been member of many technical and scientific program committees of photonics-related conferences organized by international societies like SPIE, IEEE, OSA and MOC Japan. Heidi served as reviewer for journals such as Applied Optics, Journal of Micromechanics and Microengineering, Journal of Micro/Nanolithography as well as evaluator for photonics-related projects submitted at “Agence Nationale de la Recherche (ANR)” - France, the European Commission (EU) and the Institute for the Promotion of Innovation by Science and Technology in Flanders (IWT).

Prof. Dr. Ir. Hugo Thienpont chairs the Applied Physics and Photonics Department at VUB and is director of its photonics research group B-PHOT, which he built over the years and which today counts more than 65 scientists, engineers, and administrative and technical staff. Hugo Thienpont also built up a track record as initiator, promoter or coordinator of many strategic research and networking projects, which are financially supported by regional, national and international bodies. He authored more than 850 Web of Science cited papers; his WoS h-index is 35 and his Google scholar h-index 42. He was promotor of 40 PhDs, edited 22 conference proceedings or special journal issues, authored 10 chapters in books, was key-note speaker at more than 50 international conferences, and is co-inventor of 21 patents. Besides academic-oriented research projects Hugo Thienpont has successfully managed more than 25 large-scale micro-photonics-related industrial projects for which his photonics research team received in 2005 the nomination ‘VUB Focal Point for Industrial Validation’ and this recognition was renewed in 2010 and in 2015. In 2008 he obtained the prestigious status of Methusalem top-scientist from the Flemish government for his research track record in photonics. In 2012 Prof. Thienpont becomes Vice-Chancellor for innovation and industrial policy of the Vrije Universiteit Brussel.

Prof. Dr. Peter Dubruel is currently heading together with Prof. Sandra Van Vlierberghe a group of over 20 people and has published close to 200 A1 papers. Since the start in 2006, he has been involved in several EU projects (3 FP6, 4 FP7 and two Interreg Projects). Since end 2006, he has delivered over 30 invited lectures. He has been the spokesperson of the Young Scientist Forum (YSF) from the European Society for Biomaterials (ESB) for more than 5 years and he is currently Board Member of the European Society for Biomaterials since 4 years. He is part of the editorial team of BIOMAT.net and the journal Biomaterials. In 2010 and 2012, he was awarded, respectively, the YSF Excellence Award from the Romanian Society for Biomaterials and the Jean Leray Award from the ESB. Finally, he is the proud father of Dries, Mathis and Lander.

Prof. Dr. Sandra Van Vlierberghe (10-07-1981) holds a 20% professorship at the Faculty of Engineering of the Vrije Universiteit Brussel (VUB) and is full professor at the Polymer Chemistry & Biomaterials Group (Centre for Macromolecular Chemistry, Ghent University). She has acquired expertise related to the synthesis, the modification, the characterization and the processing of a variety of (bio)polymers including thermoplasts (e.g. polyesters) and hydrogels (e.g. proteins and polysaccharides) for a variety of applications in the fields of optics and of regenerative medicine. She is experienced in the field of polymer processing using 3D printing, electrospinning and two-photon polymerization (2PP). She graduated as a Master in Chemistry with high distinction with majors in Polymer Chemistry in 2003 and received her PhD in Sciences in 2008, both at Ghent University (UGent). She received the Jean Leray award in 2017 from the European Society for Biomaterials. Her research mainly focusses on the interplay between light and polymers and how this can further advance the biomedical field. She (WoS h-index 24) has made research efforts in fundamental, applied and industrial polymer-related research.  She authored 110 Web of Science Core Collection cited papers of which 98 high-impact journal papers and 11 full papers in international conference proceedings. In addition, she also authored more than 100 conference abstracts. She is promotor of 17 PhDs, edited two books, authored 7 chapters in books of which 5 invited and was invited speaker at 10 international conferences and keynote and plenary speaker at two international conferences. Sandra Van Vlierberghe is YSF spokesperson and treasurer of the Belgian Polymer Group, editorial board member of the Biomaterials Network and associate editor of Journal of Materials Science: Materials in Medicine. Last but not least, she is the proud mother of Yannick and Mathis Everaert.