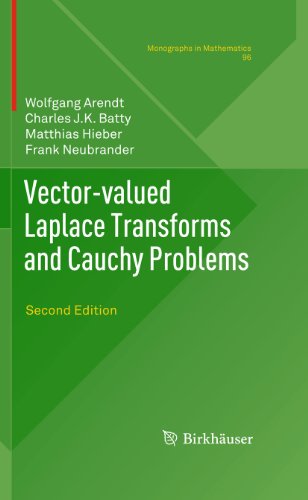 Written in a clear and accessible style and containing results obtained mainly in the last 15 years, the book is recommended to students and researchers in abstract evolution equations or interested in nontrivial applications of functional analysis.

The authors have succeeded admirably in bringing together a wealth of recent material, much of which appears in book form for the first time. This authoritative work is likely to become a standard reference on both the Laplace transform and its applications to the abstract Cauchy problem. ...

The book is an excellent textbook as well. Proofs are always transparent and complete, and many topics that could have been considered as background material are covered as well. All this makes the text very accessible and self-contained. Applications to concrete differential operators are given throughout the text. Each chapter ends with historical and bibliographical comments. ... In summary, this book will be of interest to a wide audience of (functional) analysts and it should have a place in every mathematics library. Warmly recommended!

From the reviews of the second edition:

“This monograph is undoubtedly a valuable contribution to the abstract theory of Cauchy problems. ... this book can serve as an excellent guide for the Laplace transform and Tauberian theorems in the Banach space setting. A special appreciation has to be given to the Notes which are included in each chapter ... .” (Yakov Yakubov, Zentralblatt MATH, Vol. 1226, 2012)

This monograph gives a systematic account of the theory of vector-valued Laplace transforms, ranging from representation theory to Tauberian theorems. In parallel, the theory of linear Cauchy problems and semigroups of operators is developed completely in the spirit of Laplace transforms. Existence and uniqueness, regularity, approximation and above all asymptotic behaviour of solutions are studied. Diverse applications to partial differential equations are given. The book contains an introduction to the Bochner integral and several appendices on background material. It is addressed to students and researchers interested in evolution equations, Laplace and Fourier transforms, and functional analysis. The second edition contains detailed notes on the developments in the last decade. They include, for instance, a new characterization of well-posedness of abstract wave equations in Hilbert space due to M. Crouzeix. Moreover new quantitative results on asymptotic behaviour of Laplace transforms have been added. The references are updated and some errors have been corrected.