Artículos relacionados a The Tanks of World War I: The History and Legacy of...

Charles River Editors The Tanks of World War I: The History and Legacy of Tank Warfare during the Great War

The Tanks of World War I: The History and Legacy of Tank Warfare during the Great War 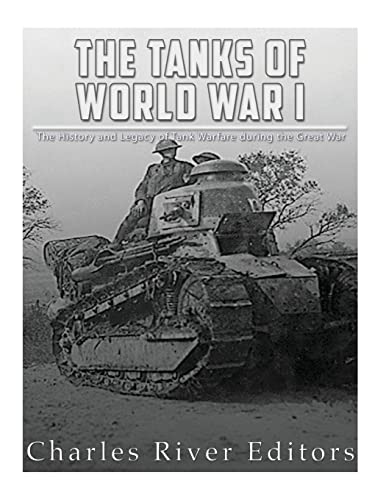 1. The Tanks of World War I: The History and Legacy of Tank Warfare during the Great War (Paperback)

Descripción Createspace Independent Publishing Platform, United States, 2017. Paperback. Condición: New. Large Print. Language: English. Brand new Book. *Includes pictures *Includes contemporary accounts *Includes online resources and a bibliography for further reading World War I, also known in its time as the "Great War" or the "War to End all Wars", was an unprecedented holocaust in terms of its sheer scale. Fought by men who hailed from all corners of the globe, it saw millions of soldiers do battle in brutal assaults of attrition which dragged on for months with little to no respite. Tens of millions of artillery shells and untold hundreds of millions of rifle and machine gun bullets were fired in a conflict that demonstrated man's capacity to kill each other on a heretofore unprecedented scale, and as always, such a war brought about technological innovation at a rate that made the boom of the Industrial Revolution seem stagnant. One of the most important breakthroughs in military technology associated with World War I, and certainly the one that continues to capture the public imagination, was the introduction of a war machine that came to dominate the face of land battles throughout most of the 20th century: the tank. As a concept, it was not revolutionary; in fact, it harkened back to classical antiquity and to the Middle Ages, such as the covered battering rams and testudos which had made frequent appearances on ancient battlefields. The development of both modern artillery and machine guns, as well as the stalemate engendered by heavy fortifications and entrenchments, had hamstrung the mobility of infantry and cavalry and also left them both utterly vulnerable to defensive firepower. Since they were incapable of replying in kind, the tank was designed to bridge that gap. The tank's armor, thick enough to withstand lateral fragmentation from exploding shells (although not direct hits) also made it virtually invulnerable to enemy rifle and machine gun fire, and its large tread meant that it could bridge trenches which would, at the very least, have delayed infantry substantially. As for the barbed wire entanglements and obstacles that severely delayed infantry and exposed them to enemy fire, tanks could simply drive right through it. Various armies had flirted with the concept of a tank prior to World War I, but advances in metallurgical techniques (allowing for suitably solid and relatively lightweight armor) and in mechanical engineering (which allowed for the construction of a powerful engine capable of driving such a mass) finally made its development and deployment possible, as did the development of treaded track (initially for agricultural use in tractors). It was the British (at the instigation of Winston Churchill) who pioneered the "landship", but the French soon followed suit with their own designs. Ironically, Germany, which would subsequently become famous for panzers and blitzkrieg warfare, was late in taking up the idea. During World War I, the Germans continued to rely on other techniques, and they produced less than two dozen models for battlefield use. The tanks of World War I, revolutionary (and initially terrifying) as they were, had their limitations. A standard tank would literally consume its own weight in spare parts, and they were painfully slow compared to more modern iterations. They were also lightly armed - usually with machine guns or light guns at most - and some poorly designed models tended to "ditch" themselves, sometimes irretrievably, in wider trenches. However, as a mobile bastion for infantry to shelter behind in the advance, and as a psychological weapon, they were significant. The Tanks of World War I: The History and Legacy of Tank Warfare during the Great War analyzes the technological advancements in tank warfare and its impact on what was the deadliest conflict in history up to that time. Along with pictures of important people, places, and events, you will learn about World War I tanks like never before. Nş de ref. del artículo: APC9781976537783

2. The Tanks of World War I

3. The Tanks of World War I: The History and Legacy of Tank Warfare during the Great War

4. The Tanks of World War I