Artículos relacionados a DataStory: Explain Data and Inspire Action Through... 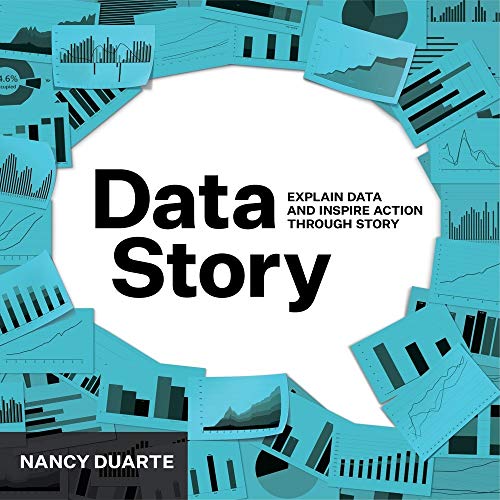 Nancy Duarte is a communication expert who has been featured in Fortune, Forbes, Fast Company, Wired, Wall Street Journal, New York Times, Time Magazine and on CNN. Her firm, Duarte, Inc., is the global leader behind some of the most influential visual messages in business and culture, and has created more than a quarter of a million presentations. As a persuasion expert, she cracked the code for effectively incorporating story patterns into business communications and is also a Harvard Business Review contributor. She's written five best-selling books of which four have won awards. Duarte, Inc., is the largest design firm in Silicon Valley, as well as one of the top woman-owned businesses in the area. Nancy has won several prestigious awards for communications, entrepreneurship, and her success as a female executive. On the list of top 250 Women in Leadership, Duarte ranks #67 and on World's Top 30 Communication Professionals for 2017, Duarte ranks #1. She has been a speaker at a number of Fortune 500 companies, and counts many more among her firm's clientele. She has spoken at numerous conferences and her TEDx talk has over two million views.

Descripción Ideapress Publishing, United Kingdom, 2019. Paperback. Condición: New. Language: English. Brand new Book. Winner: Axiom Award Gold Medal (Networking)Scientists have proven that stories make the brain light up in ways no other form of communication does. Using story frameworks as a communication device for data will help make your recommendations stick and be acted anizations use data to identify problems or opportunities. The actions others may need to take today from your insights in data could reverse or improve the trajectory of your future data. So, communicating data well, drives very important outcomes.Even though most roles depend on data, communicating well is the top skill gap in roles using data. The essential skill for today's leaders (and aspiring leaders) is shaping data into narratives that make a clear recommendation and inspire others to act. Almost every role today uses data for decision making. As you grow in your career, you can become a strategic advisor and ultimately a leader using data to shape a future where humanity and organizations flourish.Duarte and her team have culled through thousands of data slides of her clients in technology, finance, healthcare, and consumer products, to decode how the highest performing brands communicate with data.DataStory teaches you the most effective ways to turn your data into narratives that blend the power of language, numbers, and graphics. This book is not about visualizing data, there are plenty of books covering that. Instead, you'll learn how to transform numbers into narratives to drive action.It will help you communicate data in a way that creates outcomes both inside and outside your own organization.It will help you earn a reputation as a trusted advisor, which will advance your career.it will help your organization make faster decisions and inspire others to act on them!Nancy Duarte is one of the preeminent storytellers in American business and the acclaimed author of Slide:ology, Resonate, and the HBR Guide to Persuasive Presentations comes this book that will help you transform numbers into narratives. Nş de ref. del artículo: AAR9781940858982