Artículos relacionados a Essays on Fascism 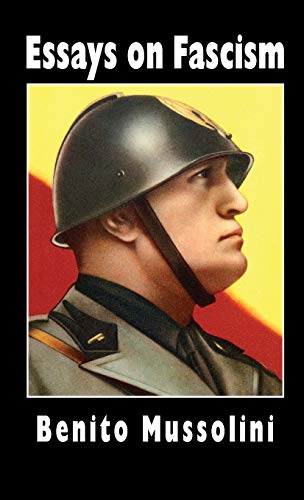 Descripción Sanctuary Press Ltd, United States, 2019. Hardback. Condición: New. Language: English. Brand new Book. "The Ideology of Fascism" was written by Oswald Mosley in 1967 and provides a post WW2 analysis of the strengths and weaknesses of Fascism as a political doctrine, and utilising its strengths proposes a United Europe, in union with science, as a prime requirement for the 21st Century. "The Doctrine of Fascism" was written by Benito Mussolini and the Italian philosopher Giovanni Gentile. A key concept of which was that fascism was a rejection of previous models: "If the 19th century was the century of the individual we are free to believe that this is the 'collective' century, and therefore the century of the State." Giovanni Gentile was inspired by Italian intellectuals such as Mazzini, Rosmini, Gioberti, and Spaventa from whom he developed the idea of "self-construction," but also was strongly influenced by the German idealist and materialist schools of thought - namely Marx, Hegel, Fichte, and Nietzsche. Gentile was described by Mussolini, as 'the philosopher of Fascism'. Alfredo Rocco developed the economic and political theory of corporatism which would become part of the Fascist Manifesto of the National Fascist Party. Rocco denounced the European powers for imposing foreign culture on Italy and criticized the European powers for endorsing too much liberalism and individualism. The Fascist Manifesto was endorsed by a large number of intellectuals, and writers, including Luigi Pirandello, Gabriele D'Annunzio, Filippo Tommaso Marinetti and Giuseppe Ungaretti. Nş de ref. del artículo: LHB9781913176310